You got it. I is for ice cream! Who doesn't love a sweet creamy bowl of rich, delicious ice cream. The first ice cream parlor in America was opened in 1776, which just happens to coincide with the birth of our nation. Seriously, it is Americana in a bowl. I'm sure most of you have some great childhood memory that involves getting all sticky from your favorite frozen treat. My personal favorites growing up were good old chocolate chip and orange sherbet. I still love the simpler flavors, but my palate has matured and I like to try some unusual flavors as well.

I've tried a few different commercial brands with mixed results, so I am experimenting with making my own. I like the idea of controlling how much and what type of sweeteners I use Fred is more the ice cream eater than I am, so he is going to be the final judge of my efforts. I do have Hannah Kaminsky's Vegan A La Mode, but the last two times I went to make something from it, I've been missing important ingredients for the ones I wanted to make. There are some exciting flavors in that book that I am excited to try like White Russian Ice Cream, Banana Pudding Ice Cream, Mouse Tracks Ice Cream to name a few.

But this time around, I decided to create my own. I'm a little pre-mature, but I am starting to dream about fall and winter flavors. The holidays will be here before we know it. Put away your rolling pin. This creation is like a frozen version of pumpkin pie without the crust. 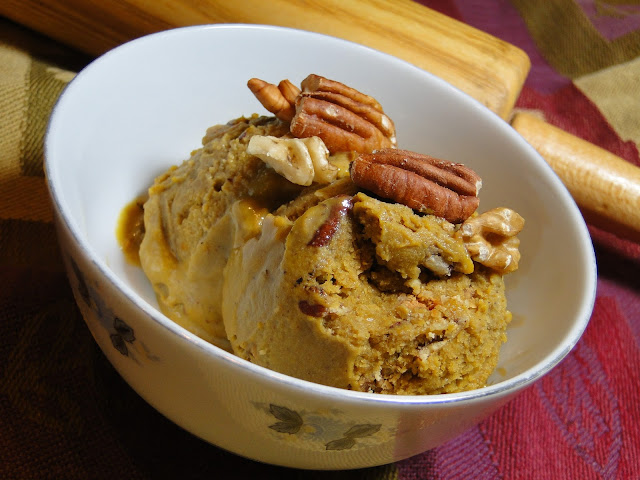 In a small bowl mix arrowroot and 1/4 cup soy creamer and set aside. In a heavy bottomed saucepan whisk together remaining soy creamer, pumpkin puree, maple syrup, dark brown sugar, vanilla, cinnamon and nutmeg. Turn heat to medium-low and cook until mixture just starts to boil, stirring frequently to prevent scorching. Remove from heat and whisk in arrowroot mixture. Whisk for 3-4 minute until mixture thickens slightly. Place in refrigerator and make sure to chill for a few hours until mixture is COLD. Churn the ice cream in your ice cream maker according to the manufacturers directions. About 1 minute before it finished, pour in chopped nuts. Let go one more minute to combine. Place ice cream in airtight sealed container and freeze for at least 4 hours.