Oh onions, what a boring world it would be without you. I truly feel sad for people who hate onions. I love them in so many ways. They bring such great flavors to so many dishes.

Onions come in 4 general varieties with many variations of each: yellow, red, white and green. Yellow is by far the most common in the US. Red ones can add beautiful color to many dishes. The white varieties are the ones used most in Mexican cooking. The green varieties, scallions and chives are great sprinkled on top of all sorts of yummies including two of  my favorites: baked taters and nachos. 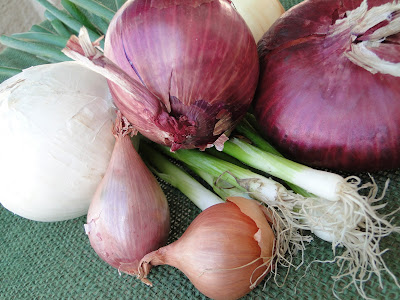 They are part of the Allum family. The humble onion has been used not only in cooking, but can also be rubbed on the skin as an insect repellent. I'm guessing by the way you will smell, it might end up being a human repellent as well. Studies have indicated that the onion can help prevent certain diseases and illnesses including heart disease and ulcers. If you get stinky onion breath, don't fret. Eat a couple of sprigs of parsley to get you back to kissable.

Onions are super versatile. You can slice them raw and put them on sandwiches and salads. Dice them up for tacos and pizza. Throw them on a skewer with other goodies and grill them. They are great in chutney, soups, stews and relishes. Oh and of course, we can't forget the addicting onion rings.

Before I gave up the beefs, I used to LOVE french onion soup. It is traditionally made with a concentrated beef stock. It is honestly super easy to make a vegan version of the soup itself by subbing a strong veggie stock. Instead of covering the crock with melted cheese like the traditional version, my version makes use of sliced stale baguettes to serve as a raft for the gooey cheese. 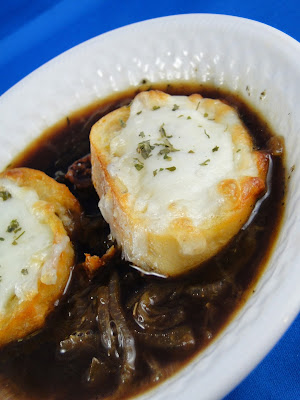 Onion Soup (of the French variety) with Cheezy Croutons

In a heavy bottomed soup pot heat olive oil over medium-low heat. Add sliced onions. Saute until onions are golden brown and caramelized, about 20 minutes. (This makes the onions beautifully sweet). If pan gets dry, add a touch of water so onions won't stick. Add garlic and saute for about 1 minute. Add thyme, salt, pepper and rosemary. Saute for another minute until fragrant. Deglaze with red wine. Saute until liquid is mostly evaporated. Add vegetable broth, kitchen bouquet and Worcestershire sauce. Simmer for 20 more minutes. Soup can be made ahead of time and kept in the refrigerator for up to a week.

While soup is simmering, preheat oven to 400 degrees. Brush both sides of baguettes slices with olive oil. Bake for 7 minutes. Turn and sprinkle with about 1 tablespoon cheese. Return to oven for another 7 minutes or until cheese is melty and bubbly.

Ladle soup into bowls and top with 3 cheezy croutons. Serve immediately.
Posted by Veg-In-Training at 7:03 PM