Back in October, I did a review and a giveaway of Ani's Fat Blast. After the New Year and some minor health issues, I decided it might be worth putting Ani's book to the test. Five friends and I decided to embark on a 28 day clean vegan eating program. I am the only veg in the group, so I was excited they agreed to go totally vegan for the duration.

Each Sunday I would prep the weekly meals for everyone who was doing raw. As I was prepping my weekly meals, I found myself wishing the page numbers were listed on the menu pages. It was kind of a pain to have to keep looking for the recipes as I was doing the prep. It's not a deal breaker on buying the book, but a suggestion on how to improve future editions perhaps?

Admittedly, the first week was a little challenging for me as well. The first few days, I could really feel the detox happening. My stomach was a little yucky and I felt a little toxic to be honest. After the first couple of days, I started to feel really energetic. Almost too much so. I was having a little trouble sleeping. That soon passed and I just felt good. I didn't realize how very sluggish I had gotten over the past few years as my weight climbed up. My co-worker started feeling a lot better too. You eat 5 small meals a day, so not once did I feel hungry. I have to admit, I was very excited to be chewing instead of drinking during week two.

Week two brought chewing and happy tummies. We both found some of the recipes very tasty and plan on making them often in the future. I fell in love with the Thermo Dressing (pg. 138). It is addicting. A lot of the smoothies were really good! There were a couple of soups I had to choke down, but most were pretty darn good. I particularly liked the Zucchini Noodles and Raw Marinara Sauce (pg. 160). The Pesto Wraps (pg. 156) were filling and delicious. We had some gorgeous chard coming out of the garden. They made the perfect wrapper! 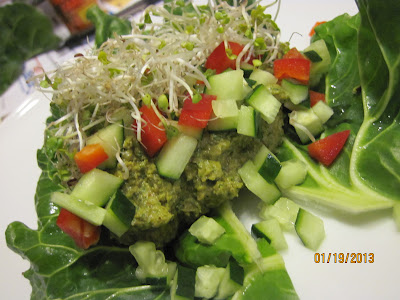 The raw brownies with fresh raspberries were a great treat. Oh, and the simple blueberries, strawberries, cacao nibs and flax snack were awesome. 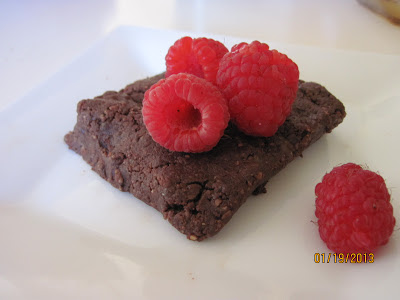 The recipes are super easy and quick. It makes it really convenient to be raw and easy to stay on the program. We both decided we would keep doing a lot of raw. She decided to order her own copy of the book. I bet you are probably wondering how much fat we blasted? In 15 days, I lost 7 pounds and my friend lost 6 pounds. While that may not be Biggest Loser numbers, we were thrilled. I have gone down a pants size too! I still have about 20-25 pounds to lose to get back down to my "runner's" weight. I plan on using this plan and the recipes to help me get there! If you were ever considering trying raw, I'd recommend trying out Ani's 15-Day Fat Blast. It is a good starting point and I can tell you it does make your body feel much better! 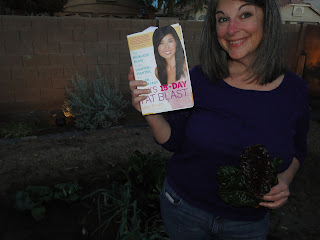 Posted by Veg-In-Training at 7:15 PM No comments: