Sheesh! Blogging has really gotten away from me. I miss the days I had lots of time to play on the internet. The kitchen has been rocking busy the last couple of weeks. Sadly, I have been very bad about taking pictures. Today I did manage to get the camera out after making dinner. 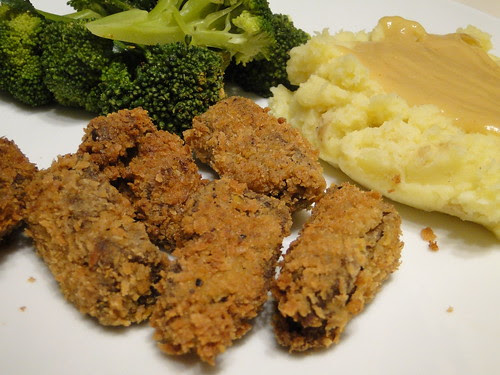 Fred has had a hankering for mashed potatoes and gravy. This was a request I was more than happy to fill. 'Taters and gravy are one of those holiday (and non-holiday for that matter) comfort foods that make me soooooo happy. We needed something green after all the holiday cookies, so we had simple steamed broccoli with a little spike seasoning. To round out the meal I had some seitan in the fridge that was a bit funky in the texture department. It was too chewy sauteed, so I decided to make it chicken fried. Now I didn't really measure, but it went something like this:

Preheat oil to 350 (when flour sizzles in oil).

In one shallow bowl mix panko through paprika. In a second shallow bowl combine soy milk through dijon mustard. Place seitan nuggets in soy milk mixture and soak for about 1 minute. Dredge in panko mixture and carefully place in oil. Make sure not to crowd pan (it will take 2-3 batches). Fry for about 3 minutes then flip over and fry other side for about 3 more minutes or until golden brown. Remove from pan on put on paper towel lined plate. Serve with mashed potatoes and gravy or with your favorite dipping sauce.

I hope you all had a love and joy filled Christmas Day!
Posted by Veg-In-Training at 8:36 PM No comments: 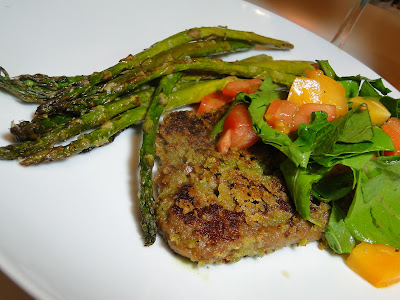 This round of Vine and Dine was from Candle 79 cookbook. I had the original Candle Cafe Cookbook, but I had to order this one. There are some wonderful pictures and interesting looking recipes as well. This week we tested out the Panko-Crusted Seitan Milanese. I am sad to say, I didn't have the best of luck with this dish. I opted to use the seitan cutlets from AVK. Something went very wrong with my seitan. It was really rubbery for some reason. (Mom didn't even eat hers. It reminded her of raw meat...fail). The crock pot method is always flawless for me, but I didn't plan far enough ahead. The seitan texture was one issue, I also had a misfire on cooking the seitan. I didn't have enough oil in the pan, so the browning was not happening. To try and save it, I added oil. Unfortunately, this made the coating a little oily. I felt that the beautifully flavored marinade was really not prominent in the final dish, which was just a shame. I saw that others used the marinade on their pasta....great idea. I also think it would have been tasty just drizzled on top of the seitan.

We were psyched to be able to use fresh arugula from our garden for the topping. It had a beautful nutty flavor. It doesn't get much fresher! We got some heirlooms from the farmers' market. They are a bit out of season, so they had a little less flavor than summer tomatoes, but I'm not complaining. They were a nice treat for the winter. To make the plate complete, I served some simple asparagus roasted with garlic and olive oil.

As a side note: The wine definitely won the day after my pathetic performance in the kitchen. Honestly, I am not one to look twice at the pinky wines in general. They tend to be too fruity for my palate. This one was perfect with this dish!! I'll let Fred tell you the rest of the story.
Today's recipe seemed to be pretty simple, but I realized that there was more than one acid in it . Lemon juice, tomatoes, and vinegar all joined in the end so I stayed safe and kept away from any wines that were lemony or had an acid tone. I chose a dry Rose from Spain. It has a nice, full fruit taste but is very light on the tongue and has a nice soft finish. The 2009 Marques de Caceres from western Spain is good all by itself, one you would give to someone who is just learning about wines, but yet it is just complex enough to be interesting to an expert. This wine actually tasted better after a few bites, melding with the basil and arugula nicely. It was a good pairing to the last drop and we can attest to that! Not a drop was wasted! 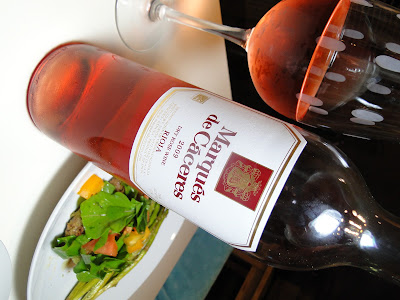 Check out what the others chose to pair this dish with over at Vegan Appetite.
Posted by Veg-In-Training at 12:49 PM 2 comments: