U is for Unbelievable. It is day 23 and the posting is still going strong. It's been an unbelievably fun MoFo for me this year. I have made it a point to visit other blogs on a fairly regular basis and it has been a blast! I have been using www.randommofo.com to find new blogs. I've also visited the MoFo threads to see who is blogging regularly. There are so many dedicated MoFo-ers out there. I hope you get a chance to visit lots of them.

Brought to you by the letter U - Upton's Naturals Seitan and Udon! 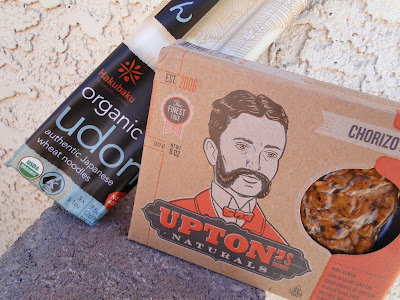 Upton's makes some really great seitan products. They offer four different varieties of ground seitan and bacon seitan. This was the first time I had the opportunity to try their ground seitan. I love the fact that their ingredients are all natural and simple. I was thrilled that the ground seitan held it shape and texture during the cooking process. I love Soyrizo, but the texture of that would have turned it to mush in this dish*. Take a look at the ground seitan! It really looks like ground meat eep! 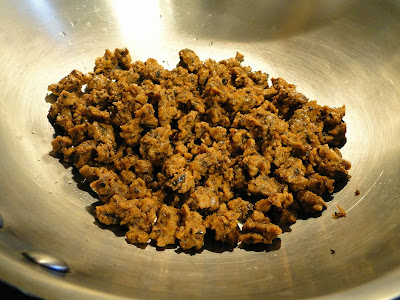 I've been in the mood for some Asian inspired stuff lately. The letter U has provided me the opportunity to scratch that itch. Udon is a simple comfort food dish in Japan that consists of a simple broth made with mirin, soy sauce and dash (a simple broth that is said to have Umami properties). It can be served as a soup or a noodle dish. I made it as a noodle dish here, but have given instructions on the soup version as well. In Japan, there are regional differences on how Udon is made. I've added chorizo and jalapeños for my own Southwestern regional touch. 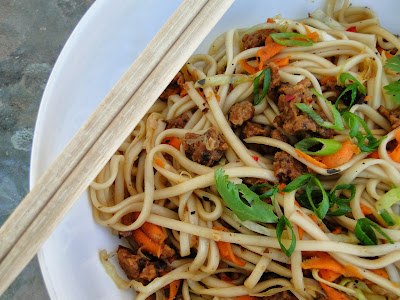 Cook noodles according to package directions, but toss dulse flakes into cooking water. Dran and rinse noodles under cold water, leaving dulse in noodles. If you are making the soup style version, reserve 3 cups cooking liquid and stir in 1 1/2 tablespoon red or brown miso.

In wok or large saute pan heat olive oil over medium heat. Add seitan and saute until just starting to brown, about 3 minutes. Add onion and saute for about 3 more minutes until onions are starting to soften. Add jalapeño, garlic and pickled ginger. Saute for until jalapeños start to soften, about 2 minutes. Add mirin to pan and deglaze removing browned bits from bottome of pan. Add cabbage and saute until it is just starting to soften, about 2 minutes. Toss in noodles (and cooking liquid if making the soup version) and cook until noodles are warmed through, about 3 minutes. Separate into 4 large shallow bowls. Garnish with green onions and cilantro. Serve immediately.

First I am going to tell you about today's Upton's giveaway! Upton's is sold online and in many states here in the US. One lucky commenter will win two coupons for one free package of Upton's Naturals Seitan. One just wasn't enough. If you are the winner, I totally recommend trying the bacon and one of the ground flavors. Leave a comment about how you think you might use Upton's seitan before midnight this Friday, September 27th, 2013. Winner will be randomly selected on Saturday!

Speaking of winners, it is time to announce the winner of Judita Wignall's Raw & Simple. The winner is: 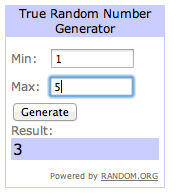 #3 Kelly of Vegan Kid blog! Kelly, I will be emailing you to get your shipping address! Congrats!!
Posted by Veg-In-Training at 12:04 PM