While I do a Lion's share of the vegan cooking in our home, Fred is also pretty good around the kitchen. He doesn't do it a lot, but when he does, he really enjoys puttering around the kitchen. He knows I have my hands full with all of the awesome cookbooks I have to review for MoFo, so he offered to give me a hand. I'm very excited to have his help and its been fun playing in the kitchen with him. He is my guest poster for today's review of The Sexy Vegan Cookbook - Extraordinary Food by an Ordinary Dude by Brian L. Patton.

The Sexy Vegan Cookbook is slightly misnamed, in my opinion, but in a good way. After reading Brian's book I appreciate his sense of humor and realized it is his love of being a vegan foodie without putting his man card in jeopardy that makes this book work for me. It is a little rough around the verbal edges but so is kale! The cover is a glossy hello exploding with basic veggie colors while the innards are almost old fashioned in that the pages are a rougher paper stock that made it feel homey, easy to hold, page through, and read. 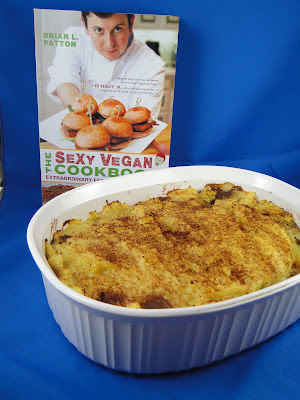 What excites me most about this book is that Brian gives me exact descriptions of each ingredient in a recipe and how it should be prepared ( chopped, shredded, roughly, finely, etc). I am not a professional  so these details take the questioning and guess work out of cooking, making each recipe more fun and easier to make. I like the little helpful hints on some of the pages. They never hurt and make me feel as if the author really wants me to succeed and have as much fun as he did. Brian covers a wide variety of foods; some harder to make, some a touch easy, which is great in a guys world. I usually like a lot of  pictures in my cookbook but this one carries it off without having many. I made the Shepherds Pie (recipe below) and wow! Easy, tasty and again, I got a tip on how to make mashed potatoes better than ever. The index is easy to read and his references to recipes in other chapters are quickly found. All in all, this book just makes basic good sense in its terminology, order, and fun. 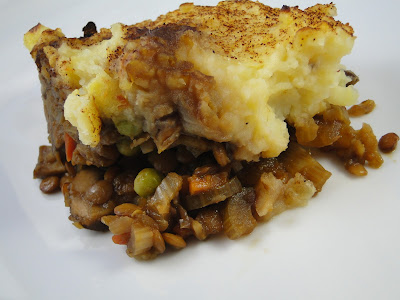 OK now here is the exciting part. This giveaway is open to you international folks. You heard it right! This fun and fab book can be shipped out of the good old USA. To get your chance at The Sexy Vegan Cookbook, leave a comment about a boy who cooks, whether it is you or some sexy beast who cooks for you. Make sure to post by midnight MST. The winner will be drawn at random tomorrow, so make sure to check tomorrow's post to see if you are the lucky winner!!

This is for those blustery winter eves, when you come in from the cold, kick off your snow boots, and have your dinner while warming your feet by the crackling fire. I don’t have winter in Southern California, so I just sit at my table as usual. If I could figure out how to turn on my gas fireplace with the fake logs, I’d at least do that...but that has proven difficult thus far.

Preheat the oven to 350ºF. In a large pot or pan, heat the oil over medium-high heat. Add the onion, celery, carrot, fennel, mushrooms, garlic, and a healthy pinch of salt. Cook for 5 to 7 minutes, or until the veggies are soft. Next, stir in the lentils, add the beer, and let simmer for about 3 minutes. Then add the vegetable stock and Worcestershire, bring to a simmer, and cover. Let simmer for 15 to 20 minutes. Check it from time to time to make sure that the liquid hasn’t evaporated. If, when you check it, the lentils are no longer covered by liquid, add a little more stock.
When the lentils are soft, you’re good to go. Turn off the heat, and with a potato masher or the back of a wooden spoon, mash the lentil mixture a little bit. Not into complete mush, just until the liquid thickens. Finally, stir in the peas, and season with salt and pepper to taste.
Transfer the stew to a large casserole dish, and evenly spread the mashed taters over the top. Cover with foil, and bake for 10 to 15 minutes, or until the taters are warmed through. Remove the foil, sprinkle the top with the paprika, and broil on high for 2 to 3 minutes, or until the potatoes are browned. Let stand 5 minutes, then serve.

TIP
I used to think that beer was basically just plants and water, and therefore always vegan. This is not true. Some beers are processed with enzymes extracted from fish bladders, or something to that effect. On the very useful website Barnivore.com, you can find out which booze is vegan and which is not. Ohhhhh, I get it — bar-nivore, like you’re at a bar where there’s booze...barnivore, ah, very good.

In a large pot, cover the potatoes with cold water. Turn the heat to high, and boil until the potatoes are very soft, about 20 minutes. Drain the potatoes in a colander, shake them dry, and return them to the hot pot. Place the pot back on the stove over low heat for 1 minute (this will help further dry out the potatoes).
In a small saucepan, heat the nondairy milk on low until it’s warm to the touch. While the potatoes are still hot, pass them through your ricer or food mill into a bowl, or, if you disobeyed my earlier command, mash them with a potato masher. But I must warn you, overmashing makes a gummy, glutinous potato, so be careful. With a rubber spatula, stir in the margarine. Stir in half of the milk, and then slowly add more until the potatoes reach the desired consistency. Season with salt and pepper to taste.

TIP
I must stress, if you really want to make the best potato possible, then you’ll get a potato ricer or a food mill. They’ll be so fluffy that you won’t want to eat them — you’ll want to sleep on them (not recommended). Trust me on this one.