Wow, I'm posting way later than usual. In my defense, I have been experimenting in the kitchen a good portion of the day. Even better, some of my BFF's came by to hang out this afternoon. The were willing subjects of my latest round of cooking experiments. If that wasn't enough to make my day, my friend Potato, brought over a beautiful bottle of red that she has been saving since my birthday last year. After the first bottle I thought it was only fitting to bring out one we'd had in the wine cooler for 4 years. We agreed that the company was certainly special enough to bring out the special bottles and a great time was had by all.

I got a new kitchen toy yesterday. In preparation for my next dinner party/cooking class at Hackett House, I have been toying around with ideas for plating the entree. Thinly sliced beautiful beets have been invading my dreams. I talked Fred into going over to Sur la Table to look at mandolins. A very nice gentleman was hunting down parts to demo the $200 version when another customer told me the best one was sitting in an unassuming box on one of the shelves nearby for only $65.00. Yippee!

I bought some lovely red and golden beets, this week's iron chef ingredient. I just wasn't feeling the creative vibe in the kitchen today at all. So, I'm hanging out in the kitchen with my sister hoping something will kick in and inspire some beet love. I'm just standing there like a big dope and I see a little iron skillet sitting on the stove. Then it hits me! I'm going to use that iron skillet and my new mandolin (which by the way makes the most beautiful thin cuts I've ever done in my life) and make a beet gratin. It still needs a little tweaking, so I am not posting an exact recipe yet. But it has great potential to be a stunning dish.

I used the mandolin to make super thin slices for yukon golds, red and golden beets. In between I sprinkled on some granulated garlic, toasted granulated onion (thank you Penzey's spices), a touch of rosemary and some Daiya Mozz. Oh and of course lots of olive oil. As I suspected the red beets permeated the color of the entire dish. We all agreed that while it was a gallant effort, the recipe needs a little work: perhaps a little more spice and I think a few more layers. But I love the idea of the dish and look forward to perfecting it in the near future.

It was so shiny, it almost looked like it had aspic on it. 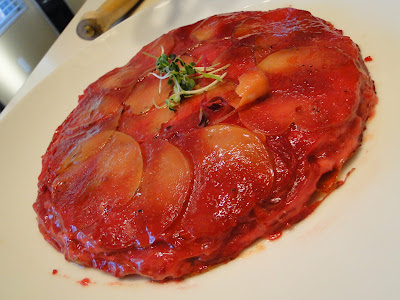 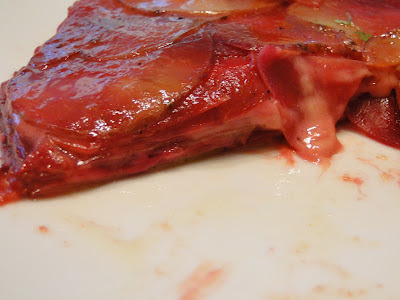 Oh yes, let us not forget the giveaway of The Sexy Vegan Cookbook. Thanks to all of you who commented. Out of fairness, the folks who commented before the deadline of midnight 10/6/12 MST were eligible.

#4 Cabby!!!
Congrats! Please email me your shipping information to receive your sexy book! 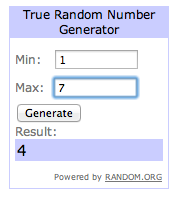