Of all of the incredible vegan cookbooks that have come out this past year, I don't think there has been as much buzz about any of them as there has been about Artisan Vegan Cheese by Miyoki Schinner. 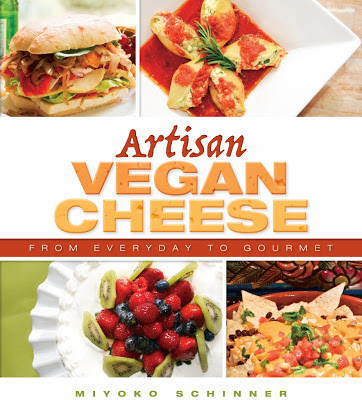 What is it about cheese that is so irresistible? It is the single food that makes many people think it is impossible to go vegan. There may be something to their claims: cheese is addicting for real. According to this article by the PCRM, cheese contains very minute traces of morphine that is naturally produced by the liver of cows. It also contains casein. This sneaky little substance releases several opiates during digestion. So if people say they are addicted to cheese, they may very well be.

However, I think a lot of the "I can't live without cheese" attitude has a lot to do with our dairy loving culture too. Can you imagine a plate of nachos without the melty goodness on top? How about a caprese salad with no creamy mozz? Pizza without cheese is possible, but how fun is that? The National Diary Council has made sure that we feel like we must use their products to be healthy. Now we know better. But what's a vegan or lactose intolerant person to do?

There are lots of really good vegan cheeses now available on the market. But some of them fall short of that "aged" flavor that many have grown to love. Enter Miyoko Schhinner, a vegan food expert and restaurateur. She has written the holy grail of vegan cheeses. Her book has taken the country by storm and made the cover of VegNews, She offers a wonderful variety of flavors and types of cheese for the reader to try out. 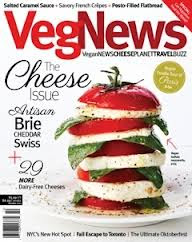 The beginning of the book offers great tips and advice on how to become your own cheese monger. The key ingredient is patience; something I don't always have in excess. Good quality dairy cheeses require time and patience, the same goes for vegan cheeses. One of my favorite parts of the introduction is when she describes how she had lots of tasting parties and made all of her friends keep trying her experiments. I felt like she could look inside my soul as I do the same thing so often!

The chapter on "Almost-Instant Cheeses" is a great starting off point for the less patient. If you like melty cheeses, you're in luck. If you are an aged cheese fan, she teaches you about a miraculous liquid called rejuvalac. This odd sounding ingredient is the key to giving your homemade cheese that slightly pungent aged flavor.

I had two epic failures on my first two attempts. It took me a little while to realize that my rejuvalac was off. It was pretty warm here when I made my first batch. It fermented far too quickly and it was very strong. I tried to make two mild cheeses with it and was very sad when they were too pungent. I also did not follow the cardinal rule of being patient. I wanted to make it "now" and did not yet have the carrageenan suggested in the recipes. Miyoko says you can substitute double the amount of agar powder (which I did), but I got much better results with the carrageenan.

At the urging of some of my PPK friends I made the pub cheddar. Mine took quite a bit longer to get to the shiny smooth stage than stated in the book, so I was worried I was going to fail. But I channelled that sometimes illusive patience and it became beautiful and shiny. It reminded me of that bright magenta and yellow cheese that comes in a little plastic tub. It was pretty yummy on crackers and the texture was spot on for a spreadable cheddar. Sadly, I did not get a photo. However, I do know that there will be more successful cheese mongering in my future as I learn from the master.

Are you excited about having a chance to win the hottest vegan cookbook in the country right now? I'm excited for you! This one is for everyone...no matter where you live. So my international friends, make sure you leave a comment for your chance to win Artisan Vegan Cheese by midnight MST tomorrow night (10/20/12) for your chance to win. Leave a comment telling me about your favorite cheesy dish or another cheese memory you have. The winner will be announced on Sunday. Good luck!

Books can be purchased through online retailers and  https://www.bookpubco.com/
Posted by Veg-In-Training at 7:40 AM