First I want to start off by talking about communication breakdown. Many times I am running at a frenetic pace for no apparent reason. I think I have to fit a million things in to each day. To add to this I have this tendency to hear things one way when they are actually said another way. I can't remember what Myers-Briggs pesonality type this is: but I tend to jump right in and do something, then correct things later if I screw something up.

Such was the case with this conversion. Fred described this favorite from his childhood to me. Somehow I got it in my silly clutered head that he was describing tuna casserole. I promptly went on the internet and found a vegan recipe for said casserole. I got to work and did some tweaks and got that bad boy in the oven. As kitchen karma would have it, it was an utter disaster. While it looked picture perfect, it was anything but. The texture was like thick paste and had no flavor. Fred hates to waste anything, but even he wouldn't eat this. Major FAIL! 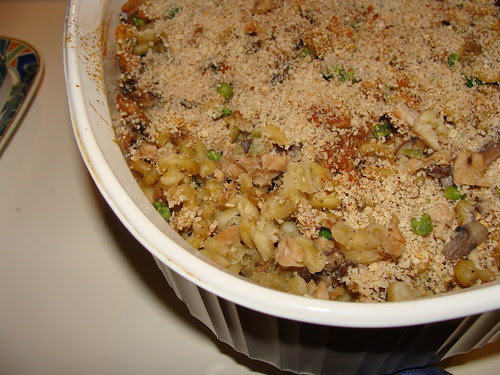 Two lessons here. Lesson one: listen carefully when people speak to you. It is uncool when you half listen. It can save you a lot of time and grief in the long run. Lesson two: trust your inner chef. When you read a recipe and it looks like it won't work, trust your gut. Modify that bad boy so you don't end up with something so nasty even the wild javelinas won't eat it.

I've ranted long enough about my failings as a communicator and kitchen disasters. On to what Fred really wanted! This is an easy, quick, filling recipe. It won't win any culinary awards, but hopefully it will make your family happy and full. 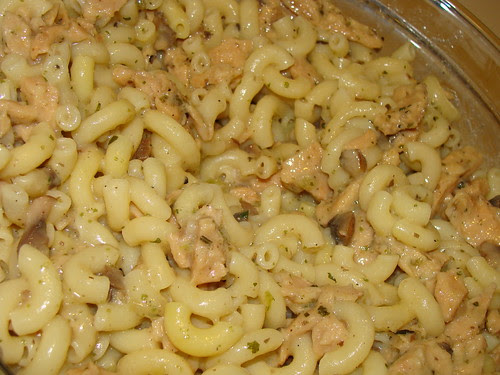 6 Servings
1 1/2 cups dried pasta (elbows or other small-ish pasta)
Water for cooking Pasta
1 cup Butler soy curls
1 cup vegetable broth, hot
1 Tablespoon Kelp powder
2 Tablespoons Earth Balance or other vegan butter
1/4 cup unsweetened soy milk
1 Tablespoon nutritional yeast
1 1/2 cups cream of mushroom soup (vegan of course)
Salt and Pepper to taste
Pour hot broth over soy curls to re-hydrate. Let soak for 5-10 minutes. Drain. Dice soy curls and sprinkle with kelp powder. Cook pasta according to package directions. Drain pasta and transfer to large mixing bowl. Add earth balance to HOT pasta. Mix soymilk and nutritional yeast in small saucepan. Heat until slightly thickened. Pour onto hot pasta. Heat cream of mushroom soup in same saucepan and add heated soup to the pasta mixture. Add soy curls and mix. If pasta has cooled of it can be re-heated quickly in large pan. Salt and pepper to taste. Enjoy!
Update: Fred has spoken. He says this is supposed to be soupy. Easy enough. To eat this Fred style you will have to add more cream of mushroom soup just before serving to your liking. If you add the soup ahead of time, the noodles will soak it all up and it will be very sad. Hee hee.
Now this is the recipe in it's original form. For me, I like to get more of a nutritional bang for my buck. As an option you could add some steamed spinach or kale to up the nutritional value.
Posted by Veg-In-Training at 6:56 AM