The original recipe for this was handed down from my grandmother to my mother. I'm not sure how many generations before that it was born, but it was my all time favorite. The original recipe called for both mayonnaise and Miracle Whip. I was never a big fan of Miracle Whip, so I did take the liberty of changing the original a bit by adding mustard. This would have been cause for being ousted from the family cooking library had it not resulted in an even better version. I didn't think it was possible to make it taste any better. But lo and behold! This is an outstanding dish to take to a potluck or a picnic. 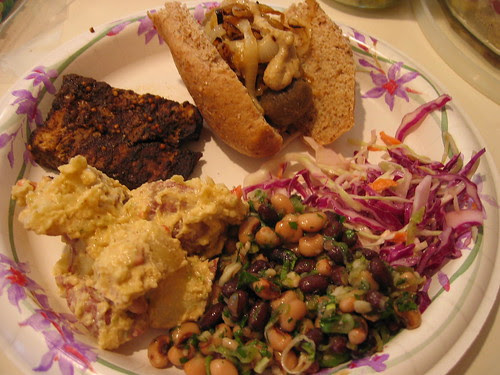 10-12 Servings
2 lbs baby red potatoes quartered
2 lbs Yukon gold potatoes, diced to same approx size as red potatoes
4 tablespoons vegan French dressing, separated
1 ½ tsp celery salt, separated
2 stalks celery, finely diced
1 med white or yellow onion, finely diced
2 tbsp pimento, finely diced
¼ cup German-style mustard
1 cup Vegannaise, separated
¼ cup tightly packed dill,
Salt and pepper to taste
In two separate pots, boil the potatoes, reds in one and Yukons in the other. I recommend this as they may have different cooking times. Cook until just soft, being careful not to over cook. Drain but do not rinse potatoes. While still hot stir 2 tbsp French dressing and ¾ tsp celery salt into each potato pot. Let potatoes cool completely, this may take an hour or more. Once the potato mixture is completely cool, you can transfer all of the potatoes into a large mixing bowl and mix in the remaining ingredients. Add salt and pepper to taste. Chill for at least 4 hours, overnight is best.
Posted by Veg-In-Training at 5:35 PM