This week's cookbook challenge book was Vegan Soul Kitchen by Bryant Terry. I've always been curious about this book. Interestingly enough, this past week I have a new co-worker who just happens to be doing some non-vegan catering with his wife. Their theme: soul food and Mexican fusion. So I asked him if he had any veg friendly menu items. He said they really didn't. I brought this book in for him to check out for ideas and also gave him a try of the Red Beans and brown rice from the book. He was impressed. Score another point for awesome vegan goodness.

I have to say that when I first looked through the book, I was pretty indifferent. I guess the saying you eat with your eyes first is true. The book has a few black and white pictures and that is it. I'm sure I'm not alone when I say I love pictures in cookbook, the more the better. It is kind of cool that he suggestes music with all of the recipes. It gives the book a fun little twist.

I've only made two dishes from it so far and both were really good: Crisp Green Beans with Roasted Shallots and Walnuts and Red Beans and Brown Rice with Red Wine Simmered Seitan. The recipe for the red beans and rice calls for an entire bottle of wine for simmering. I honestly think you could get away with 3 cups, saving a glass for yourself to drink while you are cooking. For me the real star of the show were the green beans. The roasted shallots gave them a creamy rich flavor. The toasted walnuts provided a beautiful earthiness and crunch to the dish. The tarragon dressing was more on the vinegary side...which I love! Somehow I ended up with far more dressing than I needed. But I am sure it will be great on a simple salad. I'm looking forward to trying some more from this one down the road. I just need to get over the lack of pictures thing. 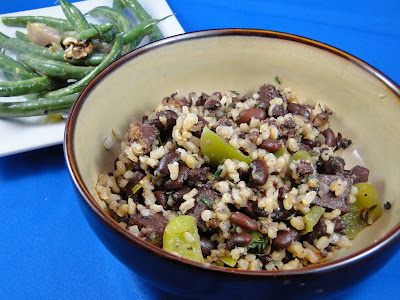 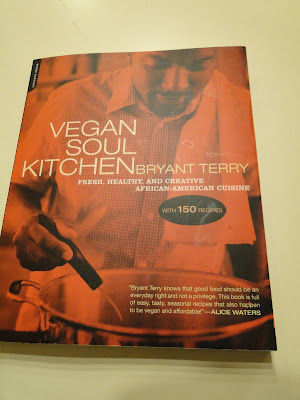 Email ThisBlogThis!Share to TwitterShare to FacebookShare to Pinterest
Labels: MOFO