What is this seitan that we veg types speak of? While it is pronounced like Satan, it is not evil. Seitan which can also be called wheat gluten, gluten or mock meat is a meat analog (faux meat) made from vital wheat gluten, sometimes other flours, seasonings and flavored liquids. Vital wheat gluten is quite different from regular wheat flour. It is much higher in protein content, which makes it ideal for making a high protein meat substitution. The protein content can vary a bit from recipe to recipe and brand to brand. You can expect to get 20-30 grams of protein per 4 oz serving. Impressive I know!
In the days of the dinosaur, the traditional method of making seitan was kind of a pain and took a lot of time. The poor cook would have to mix flour and water to form a dough.  Then it would have to be kneaded under running for like 30 minutes to remove the starch. After all of that manual labor, the dough would then be simmered for a couple of hours and if you were lucky, you would simmer it correctly and get an edible batch.
Thankfully, these days there are much simpler methods. A few of the most common methods are the simmering method, the baked method, the slow cooker method and the steamed method. I've tried them all. Each method yields a different texture. Which one you chose will depend on what recipes you want to make.
The first type of seitan I ever made was Isa Chandra Moskowitz's recipe from Veganomicon that uses the simmering method. Amazingly the first time I made it, it turned out perfectly. The simmering method produces a very tender and juicy type of seitan which is great for searing or using in Asian dishes. I personally find this method the trickiest of those I've listed, but if you can get it down without producing "brainy" seitan, the flavor is just outstanding.
Let's talk about brains. Brainy seitan can ruin your day and your recipe. First, make sure that you start by putting your gluten dough into COLD simmering liquid with plenty of room to expand. Brainy or spongy seitan is usually caused by letting the simmering liquid come to a boil. This is a big no-no in making simmered seitan. To prevent the nasty globs of spongy gluten, you must actually watch the pot so it never boils! Seriously, do not let it boil. Keep the heat low enough so it very, very gently simmers. Hopefully after about an hour of gently simmering, you will have beautiful and delicious seitan.

Another word to the wise: when you are measuring and using vital wheat gluten, be careful not to spill much. If you do, wipe it up with a dry towel or else you will have a sticky mess on your wet towel. That gluten is crazy sticky stuff.
This top picture shows a seitan that has gone the way of the brain. You can see that there is no true form to the gluten. It actually looks mushy and spongy: 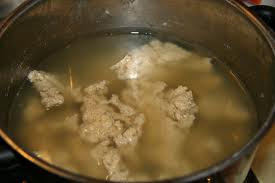 This next picture shows perfect simmered seitan. Look at how well formed these babies look: 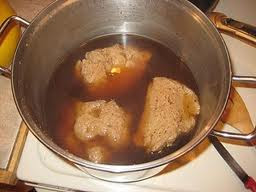 Throughout the week, we will look at the different seitan cooking methods and some delicious seitan recipes. There are so many things you can do with a little vital wheat gluten!
Now we can't forget to announce the winner of the Butler Soy Curls giveaway!! The winner is #20 Cadyr's Kitchen!! She adores Vegan Brunch and wants to make some Courico Tacos with her new found stash of soy curls. Please make sure to email me a good shipping address at vegintraining @ gmail dot com so that I can send you your goodies. Have a delicious Monday! 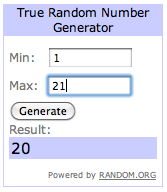