This episode of Vine and dine was supposed to be brought to you by the lovely chickpea. The featured recipe tonight from Voluptuous Vegan (VV) was the Chickpea Crepes with Wild Mushroom, Roasted Cauliflower, and Chickpea Filling. VV was one of the first vegan cookbooks I owned (after Vegan with a Vengeance). I was so thrilled with this book because it had a sort of fine dining edge that I loved!! Like many of my books this one is totally under-utilized.

One thing I love about cooking challenges is that I try recipes that I would probably pass up because of certain ingredients. I am semi-ashamed to admit that I am 1/2 Irish and I usually hate cooked cabbage or sauerkraut. Sue me. I'm also luke-warm on cauliflower, but I eat it because, darn it, it's good for you. I have been proven wrong a lot in the last year or so by some pretty yummy recipes. This was yet another case of in my face cauliflower and cabbage-goodness. The crepes have a really awesome texture and flavor. My mom said in a weird way they reminded her of an egg-roll-esque type flavor. 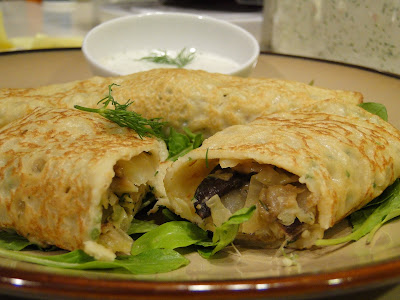 I do have to admit that I had to take a couple of liberties. As my traveling companions tomorrow will tell you, they will be eternally grateful that I subbed cannellini beans for the chick peas. As I was cooking along, I pulled out my soft tofu to make the horseradish cream. It had a funky and highly suspicious yellow film on it. So into the garbage it went. Thankfully I had some Toffutti sour cream in the fridge. I used that instead. I made a couple of other tweaks to the recipe that now escape me after a few too many glasses of wine and a bit of time in the sun and the pool. It was graduation day after all. The sauce was kind of a cross of a tzatziki and creamy dill dressing. Um awesome for sure. It was a perfect compliment to the crepes, but I think it would be equally awesome as a veggie dip. The arugula was almost too overpowering as a garnish. I found myself pushing it to the side and eating it later with the sauce on its own. We all thought this was an excellent choice.

Fred had a very educational and interesting evening hunting down wine tonight. It is my hope that he will share everything he learned. I'm also hoping that some of the perplexing questions that came up might be answered by someone out there as we were really curious why it is so damned difficult to find answers to the vegan wine questions Fred poses to the "wine experts" he encounters. Not to dog the incredibly accommodating and helpful people that share their knowledge at all, but the vegan component really seems to throw many a wine aficionado. Fred will be adding his bit a little later today if he can figure out how to update my blog, EEP! 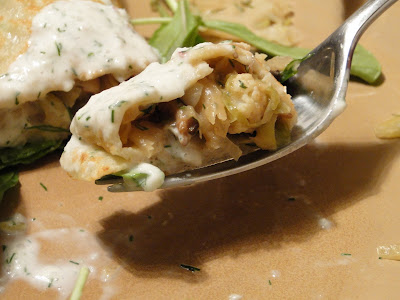 As a side note, I had the unbridled joy of using onions I pulled from the garden just prior to cooking. I was going to post a picture of the onions, but dear readers, the pictures were wisely censored  by my mom and my beloved Fred. Note to self, do not break out the camera when you are wearing your strapless swimsuit after an afternoon in the pool with adult beverages. Thank you Mom and Fred for saving me much embarrassment. That is true love. 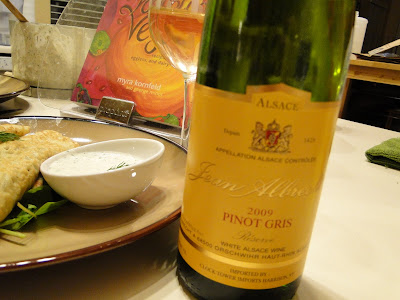 I could not confirm our Jean Albrecht "Pinot Gris"  is vegan so I do not think it is, darn. My learning curve on vegan wines is going to be much bigger than I thought. This wine was a fantastic match for our dinner, gold in color, perfect acid content with a strong mineral base that would not wash away with strong foods like cabbage or dill. One of my wine experts actually read Kim's recipe and said it would be better matched with a beer. This wine is mellow and not sweet, a plus. It comes from a region in France that is  rugged and a little dry. A Pinot Gris ( in Italy it is the same as a Pinot Grigio) is a finicky, thin skinned, tender grape with a lot of taste. I find it interesting that a grape of this nature thrives in a rugged appellation. It's sugar and alcohol content can change in a manner of a few days with changes from cool and rainy to warm and breezy. I chose this wine as it has a slight smokiness  and a hint of mushroom undertone, which I hoped would twin up and become one with Kim's mushrooms. It gets this character from a little rot that happens in between picking and fermenting. There is such a thing as grand  rot which is a whole nuther subject. I have read that 09 was a good year for this area producing very round and balanced wines which this one was. It matched dinner very nicely. I did learn that a list of vegan wines has to be updated constantly as one season a vineyard may not be vegan and the next it could be. A vineyard might try a fining process with clay or diatomaceous earth and it may not work with that years grapes or they may not fine at all one year. Unfortunately, most white wines need some type of filtering or they would turn out to be cloudy. The unvegan fining processes use one of, egg whites, casein (milk protein), gelatin, chitin (lobster and crab shell), or isinglass ( a gelatin made of fish bladders). One saving grace is that with the advent of mad cow disease, Europe made it illegal in the early 90's to fine wine through cow blood.  My wine sommeliers are very helpful and knowledgeable but when I whip out the V word, time stops for 15 seconds while they uncross their eyes and gather themselves. It is not that they do not know about the V, it is that no one ever asks if slaughtered beings were used to make our feel good libation.  It would be very helpful to put a V on the label and I do not know why they don't, I guess there is a stigmatism about them darn vegans. They are probably populating and drinking good vegan wine somewhere.
Next week, vegan wine!