I have to admit, I used to love the drinking holidays in my younger years. However, I've either gotten a lot older or smarter or both. I no longer stay out until the wee hours of the morning, wonder how I got home or nurse a nasty hangover. For these things I am truly grateful. OK that confirms it...I AM OLD! Hee hee.

Cinco de Mayo was not a holiday we celebrated back in my youth. I really only learned to appreciate this fine celebration after I moved to AZ. Many people incorrectly think that this holiday is Mexican Independence Day (which is actually September 16th). It is actually a celebration of the Mexican army's victory over the French at the Battle of Puebla in 1862. 4000 Mexican soldiers took down an army of over 8000 French and renegade Mexican soldiers. It was a huge victory. Now that you know the true reason for the holiday, lets talk about food and drink.

Admittedly, I spent much of my day at work gorging myself on chips, salsa and guacamole. So by the time I was heading home, I had lost my entusiasmo for creating a festivo Mexican dinner. I was very torn to say the least. I hate passing up any day that allows me a theme for my kitchen toiling, so I had to find something to make.

I still had cornmeal pizza dough left over from Vine and Dine in the fridge. I set about digging through the disaster that is my fridge to see if I could scrounge up any reasonable ingredients for a tasty pizza. Somewhere in its depths I found a small amount of enchilada sauce. I have no idea which recipe I used it for originally or how long it had been in the fridge. But I gave it the sniff and taste test and decided it was safe. I found some mushrooms that needed to be used, stat. There was some Soyrizo I just happened to pick up the other day. A friend of mine had given me a load of fresh cilantro from his garden yesterday and I hit the garden to find a couple of lonely jalapenos to throw into the mix. The results of this impromptu fridge cleaning/Mexican themed creation were tasty! 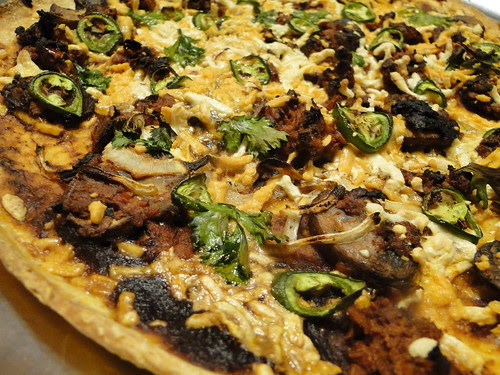 Roll out pizza dough to 14" diameter. Place on corn meal dusted pizza pan. Using a large spoon, spread enchilada sauce onto dough. Sprinkle minced garlic evenly over the pie. Do the same with the mushrooms, Soyrizo and onions. Sprinkle the Daiya evenly over the other ingredients. Place jalapeno slices and cilantro leaves decoratively over the top of the cheese.

Place pizza pan on rack that is about 6" from top of he oven. Bake for 12 - 15 minutes. Cheese should be bubbling and the crust should be golden. Let sit for about 5 minutes before slicing. Wash down with a cold Mexican beer (example below). 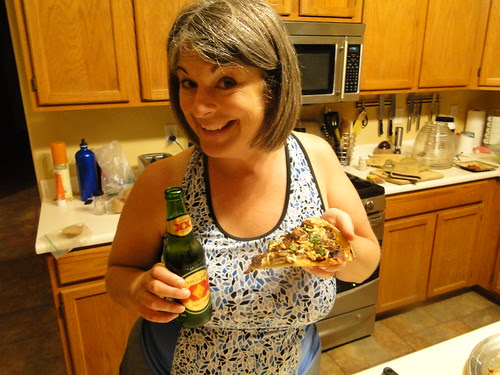