OK, so they aren't really called OMG raviolis, but they should be. This was the second V & D that featured Voluptuous Vegan by Myra Kornfeld. This week's Dine part of vine and dine was the Herbed Ravioli with Porcini Pesto and Tofu "Ricotta" (pg. 185) and Basil-Walnut Pesto (pg. 187). I will get to the OMG part, but I have a few other things to cover first. Don't forget to see what my other Vine and Dine buddies had to say about his dish and see what wines they paired with it at Vegan Appetite!

I had two really messed up errors in the kitchen today. First, while I was making biscuits for breakfast I added corn starch instead of baking powder...hello hockey pucks. Seriously, sometimes I think I'm really losing my mind. Have I never been in a kitchen before? Who puts cornstarch in biscuits? I can't even think of an excuse. The crazy mishap ended up being a blessing in disguise. I have been trying to come up with some breakfast items for the cookbook I am hoping will materialize in the near future. I regrouped and came up with a damned good southwestern biscuit that you will see in the future.

Next up, error number two. Well I guess we are going to have to call this challenge numbers two and three. A couple of weeks ago, I went about purging as I try to do every few years. I got a little over zealous and donated my pasta maker to a charity garage sale. Duh!!! This was something in my repertoire I actually do use! I had to hunt another one down for the ravioli. I headed over to Sur la Table aka Empty My Wallet, to see if they had said device. They did, but it was $75.00. Ouch. I fired up my trusty droid and found that Bed, Bath and Beyond had just what I needed for $34.99. I dragged my poor sister to the next store and scored my piece de resistance. With my trusty pasta maker in hand, I headed back to the casa. Here is where things got interesting yet again.

I headed out to the herb garden and the chive patch and rustled up some incredibly herbaceous herbs. (seen below) and got to chopping. It is amazing the volume of fresh herbs it takes to equal 1/3 cup finely minced. All proud of my mad mincing skills, I set about making the pasta dough. In this recipe, silken tofu stand in for the eggs traditionally found in many pasta doughs. I whipped up my tofu mixture and started kneading away as my trusty mama looked on. The dough was quite obviously dry and really not coming together. After a bit of kneading and water adding, I realized something was amiss. I looked over my ingredient list and much to my horror realized I had forgotten to add the olive oil to my tofu mixture. The big bummer about this, is that there was really no recovering the dough that I had trashed and the fresh herbs I had wasted. The herbs, my precious herbs, so sad. Luckily I had more to gather and mince. 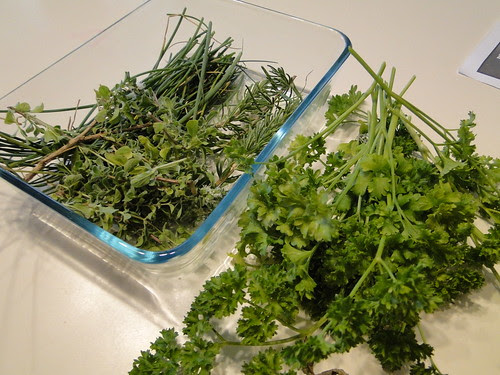 The second batch was much improved. I started kneading away, when I thought, hey, there are 4 people watching me work away. I thought, hmmm, maybe I can talk one of them into kneading the dough. My lovely sister was more than willing to get her arm work out for the day. My mom said she could see me grinning as my sister was doing all the hard labor. Hee hee. Memories of childhood when I would promise to make it home to do my chores before Mom got home from work. Jackie would always end up having to pick up the slack and do all of my work.

Actually, it makes me ridiculously happy when my family cooks with me. We had a lot of this going on during Mom's trip. As is often the case in the arid desert climate, I had to add more water to the dough to get it to the right consistency. I had a few challenges getting the dough to roll out in a nice sheet. But after a few trials and tribulations, we finally got some good sheets!

Here is how it all went together. 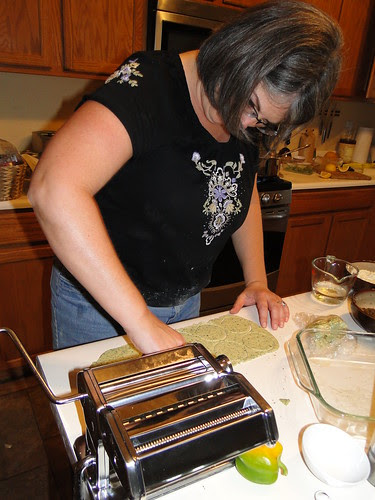 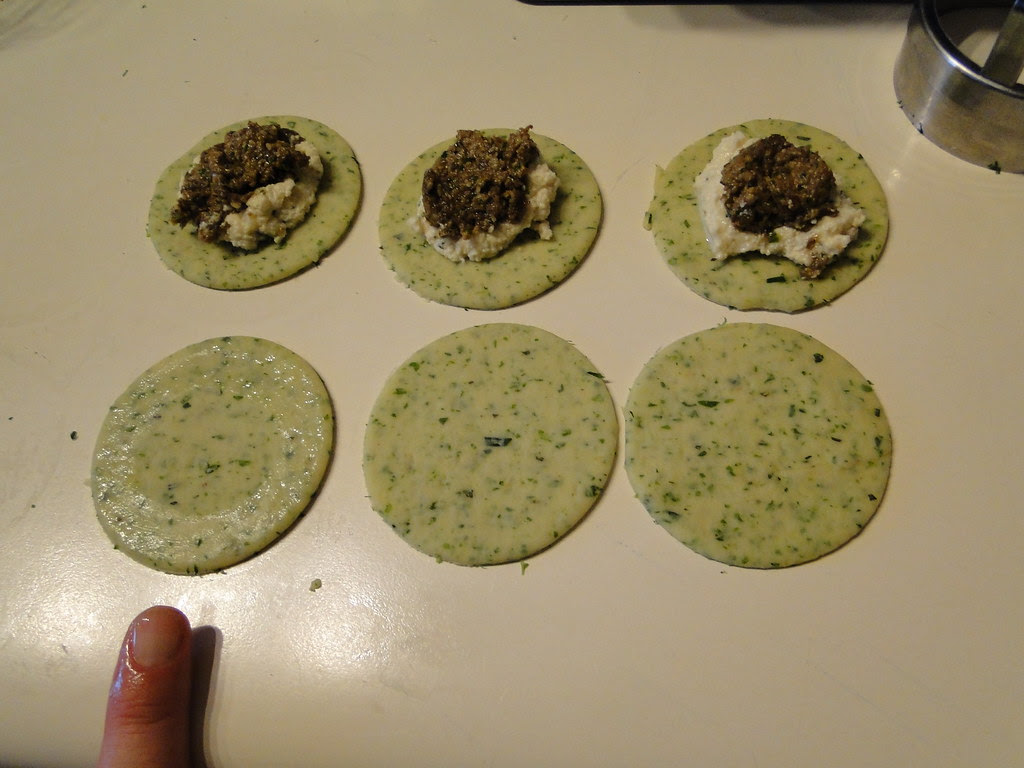 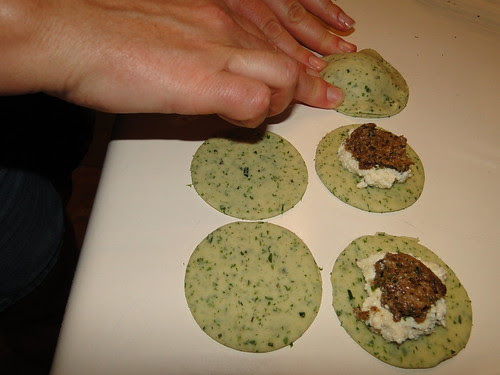 The tofu ricotta and porcini pesto came together easily. I must admit I was a little concerned with the amount of rosemary in the ricotta recipe. Rosemary is a very potent herb and can overpower if not used with discretion. But I'm happy to say my concerns were for naught.  The fresh herbs stole the show. They were everywhere: in the pasta dough, in the porcini pesto and the Basil-Walnut Pesto. I'm so happy we have our own herb garden, because super fresh herbs are the bomb! I absolutely adored the herbed pasta dough. The miso in the tofu ricotta and the pesto added the perfect amount of saltiness. Pine nuts are crazy expensive, so I used walnuts in porcini pesto. I tasted the ravioli naked before dunking in the pesto. They were incredible. The pesto was just an added treat. There was so much going on, creamy richness, earthy mushroom tones and of course the sunny flavor of all those fresh herbs! Gastronomic bliss.

Myra suggested serving this with her roasted pepper recipe. I am kind of a freak about using organic peppers and no fresh ones were available. So I cheated. I bought some crook neck squash and sauteed them in olive oil with dried oregano, thyme, granulated garlic, salt and pepper (which gave the plate a nice color contrast) and topped it with jarred organic sliced roasted red peppers. To round out the meal we found a really nice local baked multigrain bread. I made a garlic butter with Earth Balance, Carla Kelley's Cheezy Mix, fresh minced garlic and minced parsley (from the garden of course). 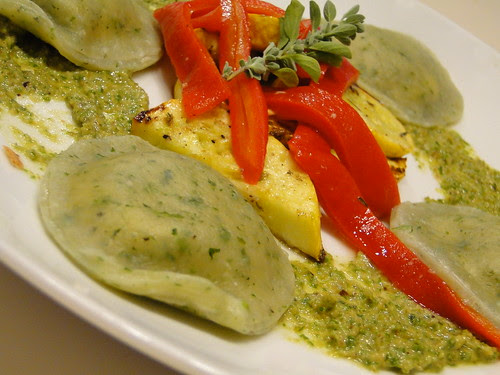 Fred, Mom and I were doing a lot of mmmm and ohhhhh-ing over this one. Mom has eaten a lot of vegan dishes a la Kim. She said that this one didn't taste vegan at all. Now mind you, mom doesn't turn her nose up at vegan food, she just wanted to make a point that no one would be able to tell it was vegan. I love her for so many reasons and her open mindedness when it come to trying anything I cook is just one of them. She's been here for two Vine and Dines this month. Sure wish we wasn't heading home as I'd love to do a few more for her!! 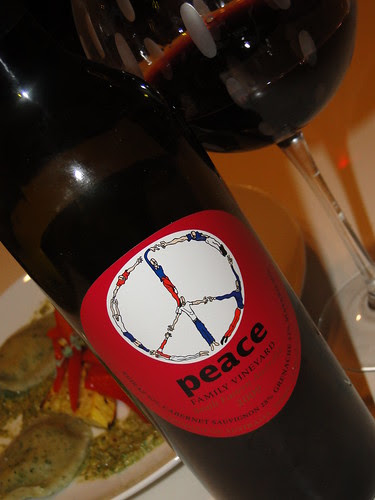 An " Andrew Peace" (remember this one) was our vegan red wine tonight (confirmed vegan). A 2009, again seems to be a good year for reds, mixture of Shiraz, Cabernet Sauvignon, Grenache, and the deal maker or breaker, Mataro. This is an Australian (family owned) winery who do make a number of vegan wines, in fact I am finding Australia seems to be more vegan friendly in this arena than most other countries that have produced for a much longer time. As of today, Australia is the fourth leading exporter of wines in the world, so there must a reason or two. I think one of those reasons is innovation, hence our wine tonight. The Mataro grape is an earthy, blackberry driven grape that needs an ample water supply but can take more heat than most. It is higher in taninns and can be high in alcohol content when conditions are right. I think that is why they mixed it with the other three grapes to make it a more interesting, characterized wine. It worked for me. Kim's very organic, herbal dinner was a mid tongue blessing and I reveled in the mild but yet fruit forward blackberryness with pepper chasing a slight tobacco taste that covered the rest of my tongue. Kim and her mother would have rather stayed in their comfort zone with their food, not so much blackberry forwardness, perhaps a touch softer in the tannin area. All three of us agreed it was a very nice wine and would suggest it to friends in any occasion. In fact, I am one of my best friends and I believe I will find a couple of "Peace" wines in our fridge in the near future.


DON'T FORGET TO CHECK BACK FRIDAY FOR MY VEGANIZED VERSION OF THIS GUY FIERI RECIPE FOR FOOD NETWORK FRIDAY! Delay of game. I am behind on my FNF so this will not appear until Monday or so.
Posted by Veg-In-Training at 12:14 AM