There are those days where you just want some comfort foody goodness. To me, the smell of an apple pie baking brings back cozy fond memories of my grandma. I have to admit, fruit pies were not my thing as a kid, but Grandma's apple pie was the exception. She was truly a master of pie crust. It was crispy on top, perfectly flaky and crusted with sugar. I'm certain it was chock full of shortening of the non-vegan kind.

Sometimes a cook is in no mood to do a double crust on a pie. This is a great alternative when you aren't feeling the crust love. The pie is easy peasy with only a bottom crust. You can take the super easy way out and buy a pre-made vegan crust, but I prefer to make it from scratch. My favorite recipe is from Isa's Veganomicon. This is one crust recipe that consistently give excellent results. You just have to make sure your ingredients are very cold! The crumbly top on this is so yummy and far easier than making that second crust.

I like to use a variety of apples to give a good variety of textures and flavors. The mixture of tart and sweet apples and the sprinkling of cinnamon and nutmeg give this pie it's homey appeal. 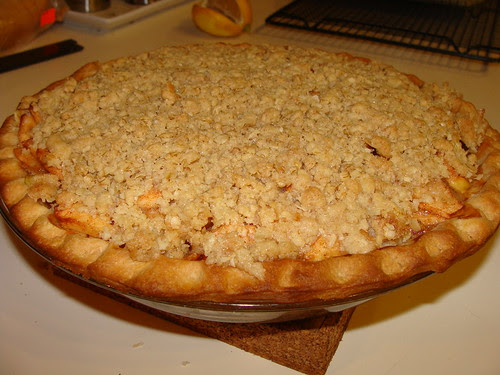 If you are making your pie crust, make the dough well ahead of time so it can chill in the fridge. Roll out crust and put into a 9" pie pan.

Make the crumble topping before peeling your apples. Mix flour, oats and cinnamon until evenly distributed. Cut in Earth balance until mixture resembles a very corse meal. Set aside.

Place lemon juice in large bowl. Core, peel, and thinly slice the apples. As you are slicing the apples toss them into the lemon juice to prevent them from browning. Once you have all of the apples sliced, toss in the sugar, cinnamon and nutmeg. Pour mixture into prepared pie crust.  Bake at 450 for 15 minutes.

Pull pie out of the oven. Sprinkle topping in and even layer over pie, making sure it is covered. Lower oven temperature to 350 degrees and bake for 35-45 minutes until the filling starts to bubble. 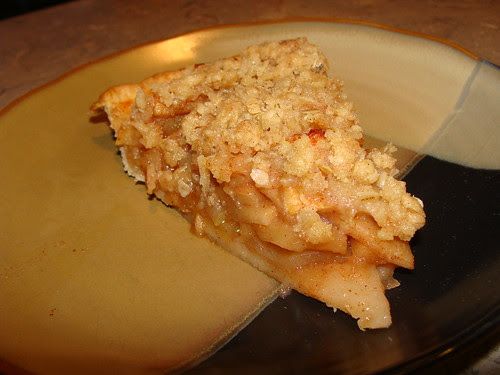