Finally we got some curly spinach to grow in our garden. I don't know what it is about curly spinach, but it has always held a special place in my heart. For some reason, I rarely find it in the stores or farmers markets here in AZ. We didn't get a whole lot and what did grow was kind of hidden under our crazy prolific arugula.

Look at how dark and gorgeous those leaves are. The crevices are custom made to hold yummy dressings and lots of great nutrients. 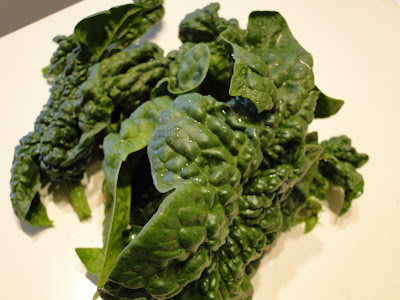 A very long time ago, I worked as one of the head line cooks for this crazy Italian guy from the east coast. He was generally a disaster in the kitchen. He once got me so aggravated, I walked off of the line during a rush with all intentions of never returning. He had no business sense and no qualms about sending out sub par crap. I just wouldn't have it. He got the hint and left me and my buddy Matt to crank out some awesome eats.

Even with his many failings in the quality and personality departments, he had a few recipes that really worked. I wish I would have written some of those down. This salad was similar to one he had on the menu. I honestly can't remember what veggies were in the salad, but distinctly remember the awesome curly spinach (that I had to wash tubs full of every day) and the caramelized onion dressing. This isn't the exact same recipe, but it tastes pretty darn close. You can make your own tempeh bacon, but I find this product: Lite Life Fakin' Bacon (at Sprouts and Whole Foods) comes in very handy when you don't plan ahead. 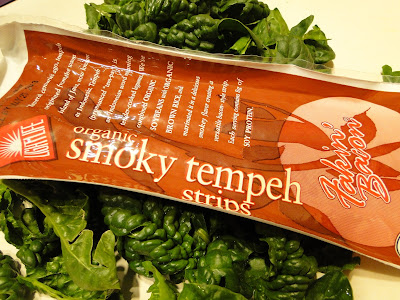 This is quick to throw together on those busy days and very filling!

While the bacon is cooking, toss spinach and tomatoes in dressing. When "bacon" is cooked, remove from heat. You can leave it in long strips, but I prefer to cut each slice into 3 pieces. Divide spinach mixture between 3 large salad bowls or plates. Divide "bacon" evenly over each salad. Garnish each bowl with 1 tablespoon pine nuts. 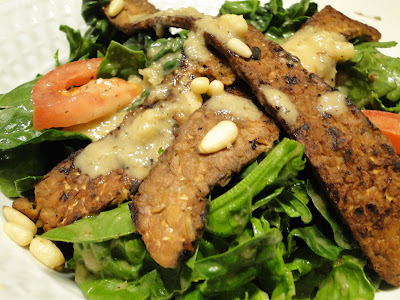 Makes a little over 1/2 cup

In a small saute pan over med heat, saute onions in 2 teaspoons olive oil until golden and caramelized, about 10-15 minutes. Place cooked onions and all other ingredients in blender and blend until smooth. Dressing is best served at room temperature or slightly warmed. It will keep in the fridge for about a week, but it should be warmed before using.

As a side note - 1 serving of Lite Life Fakin' Bacon has 8 grams of protein with only 3 grams of fat, no saturated fat or cholesterol!
Posted by Veg-In-Training at 7:25 PM