We had yet another incredible New Year's Eve feast. Several years ago a friend of mine invited us to be part of a 4 course wine pairing dinner. Back then Fred and I were still eating meat. As a matter of fact it was at one of these dinners that we had or very last meal with meat.

We loved the tradition so much, we decided to carry on with a vegan version. We found that a few of our friends were up for joining us in the vegan version, which just thrilled me! This year my good friends Beth and Jerry were our fantastic hosts. I love these two for many reasons. One of those reasons is that they love to create in the kitchen as much as I do. It makes our dinner party celebrations even more awesome. This year they decided on an Italian themed dinner.

The next couple of days I will be posting about our adventures course by course. I am going to do it in reverse for no other reason than I took a long time to write up my dessert recipe in my wine induced day after fog.

I must start off by saying, desserts and pastries are still my Archilles heal. It is always a challenge for me to come up with something worth serving to others on my own, at least without  having to try and try again. My original plan was to make white chocolate mousse stuffed cannolis using the white chocolate mousse recipe from The Artful Vegan. The mousse was an epic fail. It was completely liquid after sitting in the fridge all night. It was a really sad and expensive fail. But the show must go on.

To keep with the Italian theme I then thought that something with "marscapone" would be a good idea. I didn't want to do tiramisu, because I felt that would be too obvious. So I started playing around with the marscapone idea first. I had some egg nog in the fridge that I had bought for Christmas and never used and the Egg Nog Marcapone Cream was born.

We had a white elephant exchange a couple of night ago and I walked away with some yummy fig balsamic vinegar from Queen Creek Olive Mill. As soon as I got this I knew I had to use it somehow for this dinner. 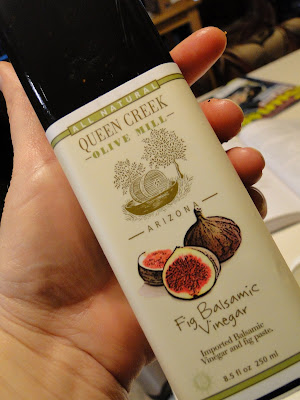 After the syrup was made, I was having a hard time deciding on the poaching liquid. I wanted to make sure there weren't too many opposing flavors going on. I ran to our local AJ's food market and talked to Chris their wine and spirits expert. He immediately took me to where there was a lovely pear liquor. It was pricey, but I had to have it. I was toying with the idea of using a sweet marsala, which I think would work well here for a lot less dinero. The reason I steered away from that this time was the wine Fred had chosen for the original pairing: a lovely Pirovano Extra Dry Prosecco. The wine expert at Whole Foods said this one is vegan.

While this was not easy on the wallet, it was very lovely on the plate and the palette. We were about 5 bottles in by this time so I must apologize that I didn't get a super close up. I chose to cut the puff pastry into a square for the bottom layer and a fun star for the top.

Happy 2012 my friends! May it be a prosperous, joyful and delicious year for you! 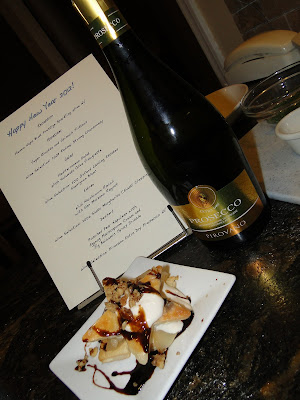 There are several components to this dish and it may look a bit overwhelming. None are too complicated and several can be done in advance. I recommend making the marcapone cream, toasted walnuts and the balsamic syrup a day ahead of time to make assembly a snap.

For the poached pears:

In a small bowl whisk together 3 tablespoons pear liqueur, vanilla beans, cinnamon and nutmeg until sugar is dissolved. In a large saute pan (large enough to hold all of the pears in one layer) over medium-low heat stir remaining liqueur with sugar mixtures. Place pears cut side down in pan. Cover and poach for 30-40 minutes (depending on the ripeness of the pears) turning 1/2 way through. Let pears cool enough to handle them and slice to about 1/4" thick. Then let them cool to room temperature.

For the Fig Balsamic Syrup:

While the pears are poaching, combine syrup ingredients in small saucepan. Simmer over medium low heat until the liquid is reduced by 1/2, about 20 minutes. Be careful not to let it boil or you will have a sticky icky mess. When the pears are through poaching. Add 1/2 cup of the poaching liquid to the syrup and stir to combine. Let the syrup and the pears cool to room temperature.

For the toasted walnuts:

In an 8 x 8 baking dish (or similar size) combine walnuts through oil until evenly coated. Bake in a 350 degree oven for about 4-5 minutes, until lightly toasted. Let cool to room temperature. Can be made ahead of time and stored in an airtight container for 1-2 weeks.

Place about 1 tablespoon marscapone cream on middle of serving plate. Place one piece of cooked puff pastry on top. Next add about 6-8 slices of the poached pears another tablespoon or two of marscapone cream (this stuff is like crack so use as much as you want within reason). Place a second puff pastry piece next. Dollop with a little more marscapone cream. Drizzle decoratively with syrup and garnish with cinnamon toasted walnuts.

Listen to the oooohs and aaaahs of your guests.
Posted by Veg-In-Training at 12:57 PM