Week 10 featured Terry Hope Romero's Viva Vegan. Yes, I am very late posting for week 10. But no, I didn't want to miss this book. I was a tester for this book what seems like years ago. It is full of fantastic latin influenced recipes. The flavors and textures of Terry's dishes are truly inspired. I love this book not only for its great variety of dishes, but for how well it is laid out. This may sound strange, but the font style and size make it very easy to read when you are flying around the kitchen. You've got to try the Spicy Tortilla Casserole with Pablanos (pg. 142). You might have to take out a second mortgage to buy pine nuts these days, but the pine nut crema is outstanding. I also fell in love with the Tostones with Avocado and Palm Ceviche (pg. 61). I took a bit of a liberty with this recipe. I didn't make the tostones, but served the Ceviche in an avocado half. Heaven!!

I tested many recipes for this book, but I never braved tamale making during testing (or before for that matter). I have to admit, I am not a tamale fan or lover, so to take hours to make something I feel "meh" about, was not on the top of my list. However, I do have a slight obsession with trying cooking techniques that I have not used much in the past. I am not a stranger to tamale making per se. My good friend ML introduced me to the process several years ago. Now SHE knows how to make the tamale experience fun. There are always margaritas and beer flowing at the assembly table. She invites a whole gaggle of women over to make quick work of the assembly. Her delightfully funny hubby Mike made up a special tool for mixing up the masa (think power drill with a strange mixing device on the end). She makes her fillings from scratch and has them ready to go when her assembly team arrives. Her tamales are famous at work, but they are decidedly not vegan.

I had actually purchased the corn husks during testing for the book. Thankfully those puppies last forever. I decided if I was going to do this thing, I would do two different varieties. I chose the Black Bean-Sweet Potato Tamales and the Red Chile Seitan Tamales. I made the Steamed Red Seitan in the morning. Then I made the filling for the black bean and sweet potato version. I had a very bad run at making Terry's chili sauce because I skipped the very important note on rinsing the chiles after they were soft. Talk about bitter. Holy crap!!! The second shot turned out perfect using a combination of Pasillas and Chile de Arbol. Nice heat.

This project was a semi-last minute decision, so I was certain I would be alone in my tamale adventure as I was solo this weekend. You have to love FB! I put a call out and my awesome friend Daphne volunteered to roll with me. We never seem to have time to hang out together, so this was a double bonus. It was a good thing she came. She had to teach me some rolling techniques, as I didn't take the time to read Terry's most excellent tutorial. So we spend several hours assembling, watching Food Network and enjoying some Mexican beer. Oh yeah!!!

The masa dough was really great to work with. Daphne noted that usually she is covered with sticky masa all over her hands and, well, pretty much every where. I mixed up a double batch of the savory masa dough (pg. 188), soaked the husks, and we got to rolling. It took a lot more than an hour to get them to firm up. But firm up they did. I thought they were both very tasty, but for me the Red Chile Seitan were the big winner. The chile sauce was soooo good on them too. We gorged ourselves on a few of the little beauties, Daphne took a bunch home and the rest are in the freezer. I love having back up meals in the freezer. So, in short, this is an excellent tamale recipe, but for me, if I'm going to take on a day long project, I would probably be making up some pierogi or home made ravioli.  But if you are a tamale lover, I highly recommend making these. The texture and flavor are just like the non-vegan version. 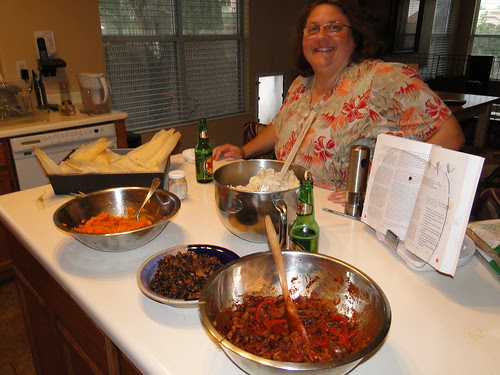 Daphne is ready to roll. Here is our assembly line. 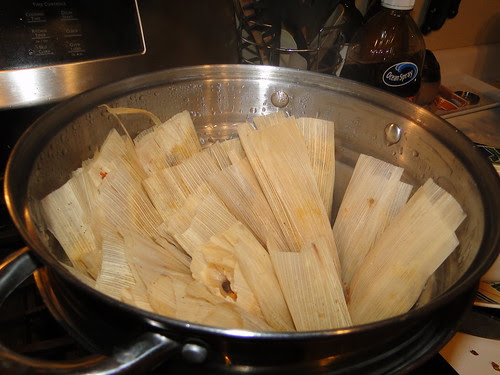 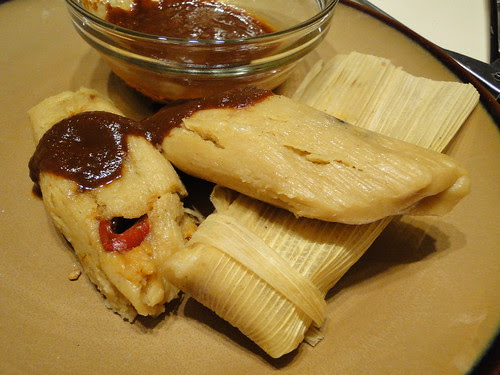 Getting Sauced - Tamales and Cooks 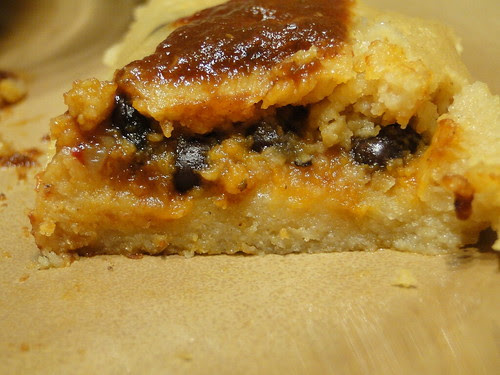 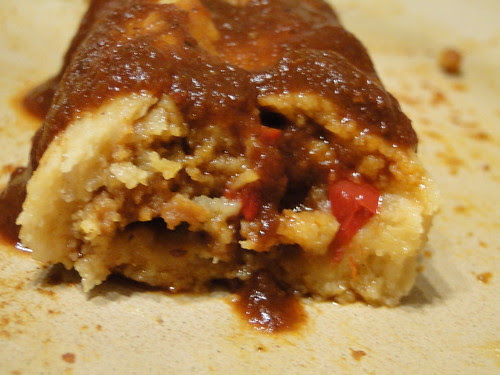 A little blurry, but here is the Red Chile Seitan Version
Tomorrow: Fred and I are joining Tami and Jim of Vegan Appetite and Liz and Matthew of Cooking the Vegan Books for Vine and Dine. Whence the chicks make a recipe from an awesome vegan cook book and the dudes pair a wine. Then we tell you all about it! This week's recipe was from the Conscious Cook and Fred did a great job with the pairing...until tomorrow!!
Posted by Veg-In-Training at 4:45 PM