Vining and Dining from the Vegan Table Part 1

Tonight we took our first delicious delve into the Vegan Table. I have to confess I don't yet own this book, but I am certain I will very shortly.

Tonight we had the pleasure of making two recipes from The Vegan Table by Colleen Patrick-Goudreau. First up were the Tempeh and Eggplant Pot Pies (pg. 206). Now I have to tell you that Fred is hardly a fan of tempeh and I am not normally a fan of eggplant, so I wasn't sure how this selection would be received by either of us. Frankly, I figured we would try a bite and drown our sorrows in Fred's wine selection. Which, honestly is not a losing proposition, because the weather tonight was beautiful for drinking dinner. But I digress.

One of the things I noticed immediately about the recipes is that she gives lots of suggestions (and permission) for options and substitutions. I took her up on this and made a few small changes. I stayed pretty true to the recipe for the pot pies. I only made 1/2 of the recipe because of the afore mentioned dislike of certain ingredients, oh doubter that I am. I added a small carrot. I just couldn't help it. I picked some fresh out of the garden this afternoon and it seemed sacrilegious to leave Mr. Carrot out of the mix. I used the max amount of capers because that's the way I roll. I love their salty piquanty nature. I didn't have ramekins, but I did have some mini spring form pans that fit the bill perfectly. I lined them with parchment paper so no goo would escape.

The recipe was pretty simple to make. I was moving slowly today because I could. I chopped and cut everything before I started as Fred was shopping for the wine and I had no idea how long he'd take. He has a reputation for spending a lot of time bending the ears of the folks in the wine stores and department doing research, a trait I find very endearing. Had I not done the prep work, there was plenty of time to do slicing, dicing and mixing at each phase. The filling probably took about 30 minutes total. I was able to mix up the biscuit dough while it was simmering. The pot pies baked for exactly 15 minutes. OK, this was very tasty! We were both pleasantly surprised by the yumminess of this dish! I thought the filling to biscuit mixture leaned a bit heavy on the biscuit side, but Fred insisted it balanced the stronger flavors of the filling perfectly. The biscuit layer had a really great crumb, texture and moisture content. The filling boasted lots of flavor from the capers, fennel and red pepper. Fred said the fennel made it for him. 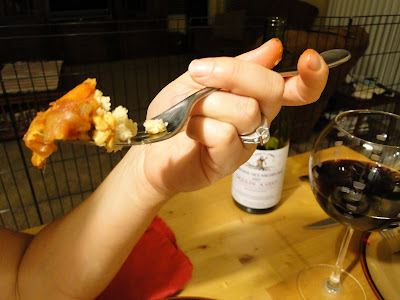 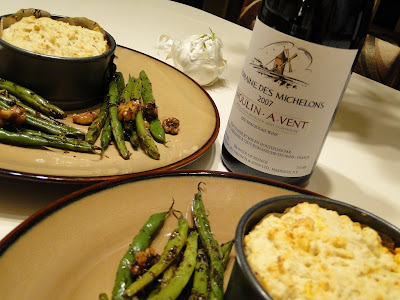 The side dish selection for this evening was the Garlic-Glazed Green Beans (pg. 241). I was fortunate to find awesome organic green beans today. I opted to substitute fresh dill from our garden for the marjoram. I also opted to add toasted walnuts. In my opinion these should not be optional. They made the dish pop. I also added minced shallots with the garlic. The first bite I had, I felt was too sweet (I'll probably cut back on the maple syrup next time). But as they cooled down a bit, they achieved a wonderful balance of flavors. Fred thought they were great. I thought they complimented the more piquant spicy flavor of the pot pies nicely. The full recipe states that it is two servings. We made 1/2 the recipe and it was plenty for 2 as a side dish.

Although I don't have my own copy yet, I am really excited to get the book and try more recipes from it. 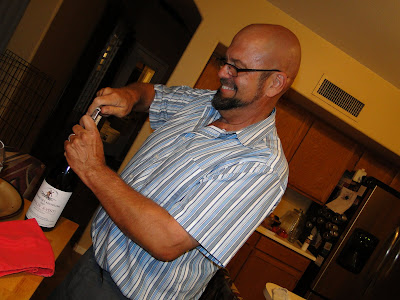 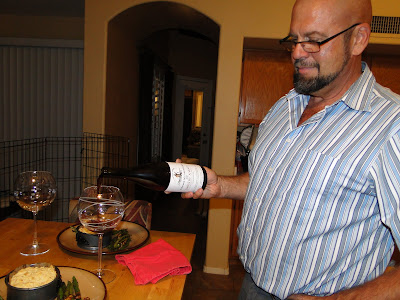 With Kim's fennel, nuttiness of tempeh, acid in eggplant, spiceness of red pepper recipe I had to find a wine that could hold it's own and not lose it's identity but yet did not want to take first place. The general consensus of the experienced help at one of my favorite wine stores was a chianti but I was unable to find a vegan one. I headed for the youth department where a couple of barely 21 year olds were all over the vegan idea, it was actually fun for my helper. He turned me onto a red Beaujolais from France. Normally Beaujolais are meant to be drunk very young but this particular "2007 Moulin-A-Vent" (windmill) can last up to ten years. At $17 a bottle the berry forward wine was a great buy and complimented the recipe very well.


**Kim's side note on the wine. This wine had definite berry characteristics, but I noticed that with the food a kind of peppery spice showed came out from hiding in the wine. We finished the bottle after the food was gone and it returned to its delightfully light and berry character. This is a great summer wine and very reasonable.