This week's featured book was American Vegan Kitchen by Tamasin Noyes from Vegan Appetite. I was lucky enough to be a tester for this book. Last summer I also had the pleasure of meeting Tami and her awesome hubby Jim in Chicago last year. The book is wonderful and so are they. It's amazing how good food can forge really special friendships. This book is full of wonderful down-home style recipes. I tried a few this week that I hadn't tried before the results were fantastic (not surprising). This is another must have for your collection.

Saturday was a real treat. We had all of the kids and grandkids over. As an added bonus their (great)Grandparents were here visiting from Tucson this weekend. It was so nice to have a house full of family. To feed the crowd, I whipped out some AVK awesomeness!

21st Century Tacos served with CTates Frijoles Negros and my fideo recipe were featured for dinner. I have had this rather chunky TVP in my pantry for some time. It doesn't work well in "meatballs" and such because it want to pop out, but it was perfect for the tacos. I made a double batch and the kids were really thrilled to have some to take home. Were they good? Well, one of our guests, who shall remain nameless to protect the innocent, ate 6 tacos. We garnished the tacos with shredded lettuce fresh from our garden, tomatoes, diced onions, fresh avocados, sliced olives and Daiya Cheddar. 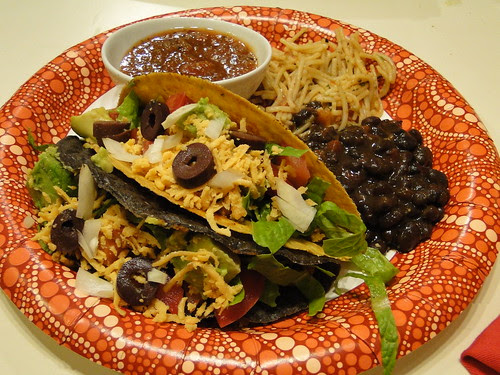 Dessert was the very easy but very decadent Crispy Bottom Peanut Butter Pie with Chocolate Fudge Sauce. This pie is super rich. It is a peanut butter lover's dream. Active time is maybe 15 minutes? There is some freezing time, but you can throw the crust in the freezer while your making the filling. Then spread the filling in throw it in the freezer and get on with the rest of the meal. No fuss. The chocolate fudge sauce is super easy too. It can be made ahead of time and warmed up before drizzling on top. I had to add more chocolate chips to get it to the consistency I wanted. It was a bit too thin following the recipe. 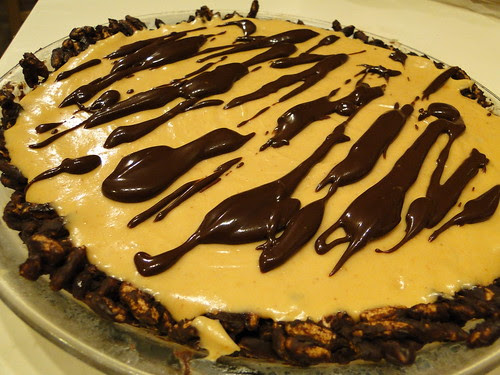 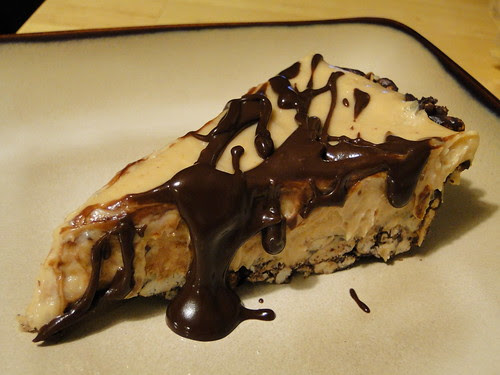 Tonight we had a birthday party on my side of the family. I wanted to take a tasty, but not run of the mill appetizer for the meat eating crowd. I decided on the Stick - to - Your - Ribs Potstickers. I made a double batch because the package of wonton wrappers I bought had 50 in it. I started by making the Savory Seitan (pg. 5). I have always made this as roasts by using the slow cooker method. Today I was a bit short on time an wanted to try the baking/cutlet method. It worked out very well. I had to speed up the cooling process by putting two cutlet in the freezer so that I could get to the party while it was still going on. When I first tasted the filling, I thought it was too sweet, but after sitting for a bit and dipping in the dipping sauce, I found them quite addicting. Only 40 made it to the party and they were gone in no time. The kids were eating them 4 at a time. I love that you can make a big batch and freeze them too. The only thing I might do differently next time is use round goyoza wrappers, just a personal preference on shape. If you have the seitan made ahead of time these actually come together pretty easily. To save time I chopped the seitan cutlets in the food processor. They were the perfect "ground pork" texture. 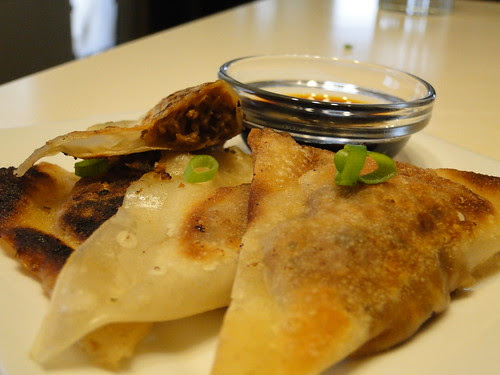