This week's Food Network Friday was chosen by my friend Celia over at On Cardamom and Cast Iron. The following is my interpretation of Giada's Lingurian "Fish" Stew. This is a simple, rustic recipe that originally called for 1 1/2 pounds of fish. 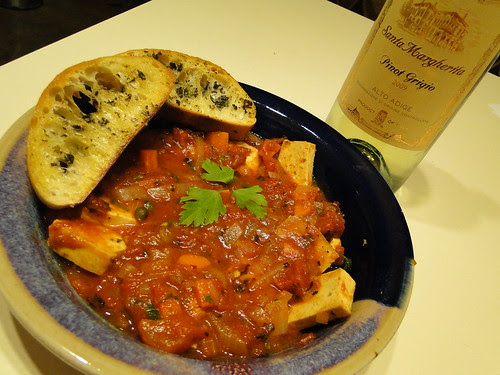 Below is the recipe I developed for the "Fish". The kelp flakes gave it that sea-like essence.

In a 9 x 13 glass baking dish, mix all of the marinade ingredients with a fork. Place tofu slices in the marinade in a single layer. Marinade for a least two hours turning half way through.

Preheat oven to 350. Bake tofu for 25 minutes, uncovered. Turn and bake for another 20 minutes until all of the marinade is absorbed and the tofu is very firm and almost dry. Cut into 1/2 inch to 3/4 inch cubers. Set aside.

For the rest of the recipe I stayed pretty true to Giada's recipe. The only modification I made is that I cut the oil back to about 1 1/2 tablespoons and added 1 1/2 teaspoons of capers with the vegetables. I used Clos du Bois Chardonnay for the wine. We both loved the sauce. It was rich with tomato flavor. The carrots added a nice texture, color and flavor. We both agreed that we'd like more of the sauce, so next time we will probably double the sauce (or at least increase it by half). I think the capers really elevated the flavor of the dish.

For the bread, I found a lovely vegan ciabatta at Sprouts market. I sliced it into 1/2 inch thick slices. I made an herbed olive oil and brushed that on to both sides of the bread and baked it for about 20 minutes. I let it cook a wee bit too long, so it was super crunchy and a bit hard. I love it, but Fred said it would have been better a bit softer. It would have made an outstanding base for bruschetta as it could hold up to some liquid.

Check out Tami's wrap up off all of the participants later today at Vegan Appetite. Keep cooking my friends!!