So the other night I was out celebrating my buddy Laurie's birthday. She and I drink far too much wine together! But this time, our communal drink fest produced a great surprise.

After indulging in two lovely wines at Postino on Campbell and 40th St in Phoenix, we ventured over to La Grande Orange Pizzeria so that one of our companions could grab some 1/2 price cookies (after 7pm). They have a lovely deli counter and bakery, but it is decidedly not vegan focused.

As we walked into the deli, I noticed these impressive super gigantoid English muffins. They were so huge they actually looked like bagels, no lie. I was going to check out the ingredient list, when as plain as day the package read "vegan". Well shiver me timbers! I was so excited.

I am not one to shy away from spending some hard earned cash on an enticing product, but I was a little hesitant. They were a bit pricey at $9.00 for a package of 6, but I just had to try them. I decided to get two packages and bring them to work. Holy crap! These babies are incredible. They are crunchy on the outside and chewy on the inside like the perfect English muffin should be. Two caveats: one, they recommend toasting them twice (they are that big) and two, they are a bit oily. I didn't care though. I just grabbed another napkin. I slathered on some Naturally Nutty Cinnamon Almond Butter and had a crazy filling and delish breakfast.

If you want to splurge and you are in the area, run down and get a package. They would be killer as a "McGigantoidMuffin" 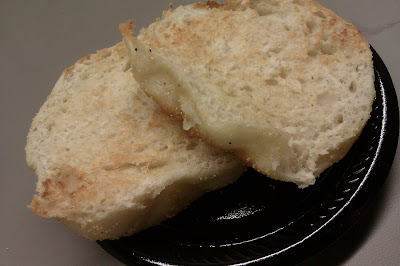