Every so often I feel like Fred doesn't get enough of the blogging love. He is an incredible man, friend, partner, and kitchen bitch. Kitchen bitch is a term of endearment I think it is cute, but sometimes Fred thinks it takes away from his studliness. Pishaw! That said Fred still gets to keep his man card, because he refuses to wear a frilly apron and nothing else. He doesn't usually read the blog, so hopefully I am safe. Otherwise I may get some serious payback when I least expect it. Honey if you're reading...I will be sleeping with one eye open.

This week Fred has been working feverishly in the garden to clear the crazy burmuda grass that seems to take over everywhere else but where it is supposed to grow. The roots are like a giant octopus trying to sqeeze the life out of our veggies. It's in the triple digits here, so the poor plants need all the help they can get. Even though we planted a little late, we are starting to get a few goodies. We've gotten a couple of stripped zuchs, a few jalepenos, cherry tomatoes, and a lone cucumber. But for me the most exciting take was the first gorgeous large tomato! Now, I wouldn't wish this on anyone, but Fred was really sick with a nasty cold this week. He had no appetite and that lone tomato was just sitting there getting more ripe. Yes, selfishly I scarfed that bad boy right down. It was so incredible. There is nothing like eating the fruits (or in this case the vegetables) of your labor (or in this case Fred's labor). It was so juicy and flavorful; it almost tasted like a midwestern tomato. I sure hope we get more before the AZ sun boils them on the vine. 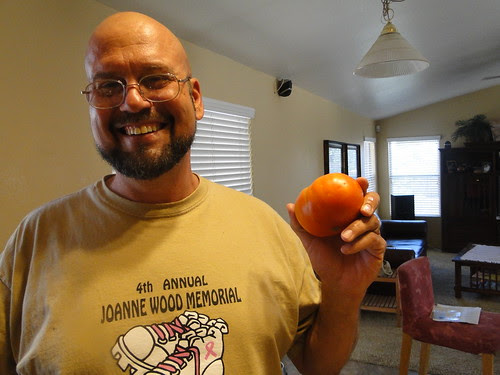 On top of being the master gardener, Fred occasionally takes his kitchen bitch role seriously. After he started feeling better this week, he mustered up the energy to cook for me. A couple of Christmases ago my mom got Fred Robin Robertson's Vegan Fire and Spice. He made a few recipes out of it when he first got it and then like so many of our cook books it ended up back on the shelf collecting dust while recipe testing commenced. I'm very happy we've rediscovered it. With his cold, I thought he needed lots of ginger and garlic to boost his immune system. I suggested he make her Garlic Soup recipe. It is chock full of garlicky goodness. As a bonus it is a recipe that hails from Spain...a country that has a special place in my heart. The soup is a lucious indulgence in garlicky stinky pleasure. Do not eat this before a date, unless your date is also having some. The broth is rich and flavorful. The garlic takes on a very savory and deep flavor. Fred used a whole grain baquette. The bread soaks up the broth and mellow the garlic just a bit. It is a wonderful combination. 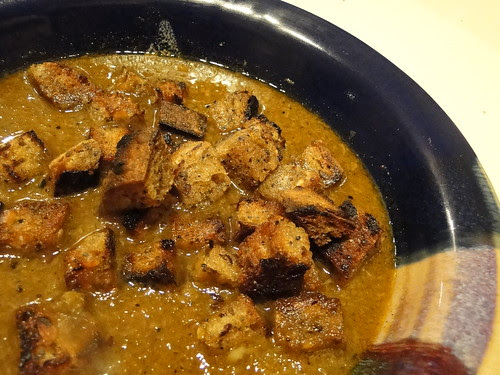 I've been very pleased with the recipes from Vegan Fire and Spice. This week I also made her Red-Hot White Bean Chili. It calls for 3 tablespoons of chili powder. Amazingly there was only 1 tablespoon left in the container! This never usually happens as we have an arsenal of spices. Luckily there was some chipotle and ancho powder in the spice cabinet. I used one tablespoon of each along with the chili powder. Some kitchen mishaps turn out to be the best. I will make it this way from here on out. It added such a great smoky depth to the hearty beans. NOM!

I'm going to not so subliminally keep laying out recipes and cook books in the hopes that my studly kitchen bitch may suddenly have the urge to whip me up some tasty treats!
Posted by Veg-In-Training at 6:26 AM