Last in the series of the New Year's Eve course dinner extravaganza.

This year Fred was in charge of dessert. After hours and hours of internet searching, he still wasn't feeling inspired. He is the best of the over-thinkers and I think he just had himself psyched out. His dessert last year was over the top, and he felt he needed to top it. The night before the dinner, he still hadn't found his dream dessert. We tossed around a few ideas and decided he would do a trio of mini-cupcakes with a banana split theme.

He diligently got to making three different types of mini-cupcakes: strawberry, vanilla, and chocolate (all from VCTOTW). Sadly, I mis-timed the cooking time on the first two batches and they would not come free of the paper liners. As luck would have it, I suggested that he do 1/2 of the batch as full sized cuppies. Those came out perfect. Unfortunately, plan A would not work...so we had to quickly devise a plan B as time was running out and Fred was just a tad anxious.

Thankfully I have a love of Iron Chef-esque moments in the kitchen. So here is what Fred did. He cut the tops off of the full sized vanilla cupcakes to make the base in the bottom of the truffle bowl. He made two variations of the raspberry mousse from VCTOTW: Strawberry and Pineapple. He added just a touch more agar agar to the pineapple to compensate for the acid content. These chilled in the fridge for about an hour. Meanwhile the bananas were carmelized in a bit of Earth Balance and brown sugar and pecans were toasted to bring out their delicious toasty flavor.

With all of the components ready, the assembly line began. The layering started with the base of vanilla cupcake top, then pineapple mousse, crumbled chocolate cupcakes, strawberry mousse, fresh thinly sliced strawberries (which were surprisingly sweet for this time of year), Soyatoo whipped cream, then finally garnished with the carmelized banana and toasted pecans. The results were fun and tasty. This was truly an on the fly kitchen triumph for Phat Freddie. Sadly we didn't get the obligatory shot of the master with his completed dish. 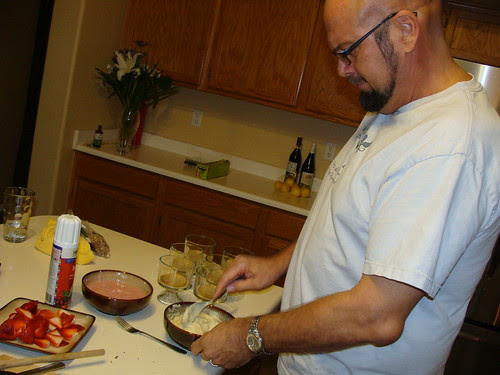 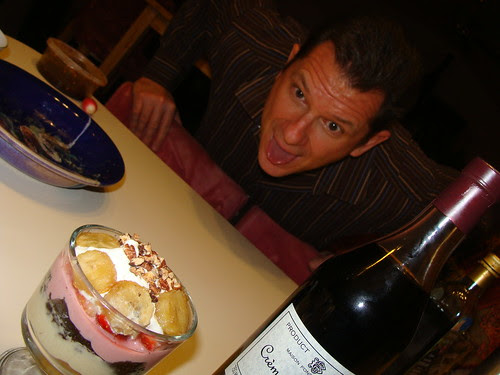 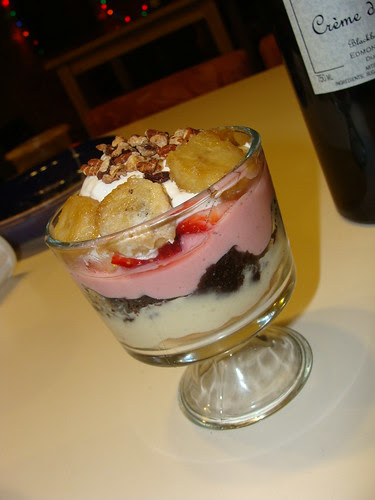