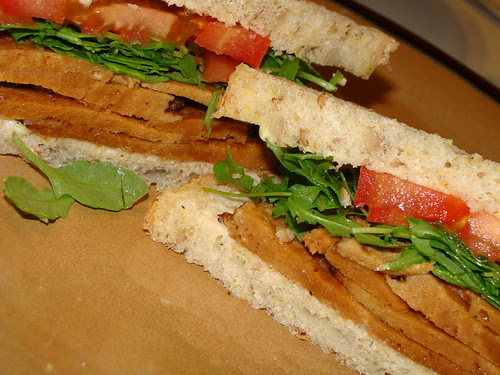 For this week's Food Network Friday Challenge I converted this Ina Garten Recipe. With the holidays approaching, it was nice to have a fairly easy conversion this week. Once the seitan is made, this is a snap to throw together. I used Tami Noyes' Beefy Seitan Recipe that will be in her upcoming American Vegan Kitchen cookbook as the base. The rest was pretty straight forward.
"Beef" and Horseradish Sauce Sandwiches.
Makes 2 hearty sized sandwiches.
4 oz Beefy Seitan
1/2 tablespoon Earth Balance
1 teaspoon dijon mustard
Salt and Pepper
Sauce ingredients
1/2 cup vegannaise
1 tablespoon dijon mustard
2 teaspoons stoneground mustard
1 tablespoon prepared horseradish
1 Tablespoon Toffutti non-hydrogenated sour cream
Sandwich ingredients
4 slices whole grain sandwich bread
1 cup arugula
1 tomato sliced thin
1/2 tablespoon softened Earth Balance
Preheat oven to 500.Mix 1/2 tablespoon EB with 1 teaspoon dijon. Coat seitan roast with mixture. Coat with pepper and salt lightly. Bake seitan for 15-20 minutes until outside gets a nice crust on it. Remove from oven.
While seitan is cooking mix together sauce ingredients in a medium sized bowl. Can keep in refrigerator for several days.
To assemble sammies thinly slice hot seitan. On one slice of bread spread the horsey sauce. Top with thinly sliced hot seitan, 1/2 cup arugula and a few slices of tomato. Butter top slice of bread and put on top (butter side down). Slice in half and serve.
Posted by Veg-In-Training at 8:01 AM