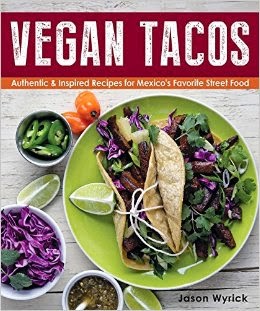 Jason Wyrick was kind enough to grant me this interview months ago when he and his lovely bride were expecting their first bundle of love. I wasn't able to post it during vegan MoFo then time and motivation to blog got away from me. The book is a true treasure of information on Mexican food and more importantly Tacos. Tacos for every meal and for every taste. Tacos for breakfast, hell to the yes! Tantalizing side dishes, you know it. Oh and margaritas, si! Not to mention Jason provides tequniques and tips to make you cook like abuela (Mexican for Grandma).

Not that the interview isn't awesome enough; but to make the deal sweeter, I'm going to be giving away a copy of Vegan Tacos to one lucky amigo or amiga as the case may be. Read on, the giveaway is at the bottom of the post. Enjoy the interview and a few pictures of the mouth watering tacos I made from the book! 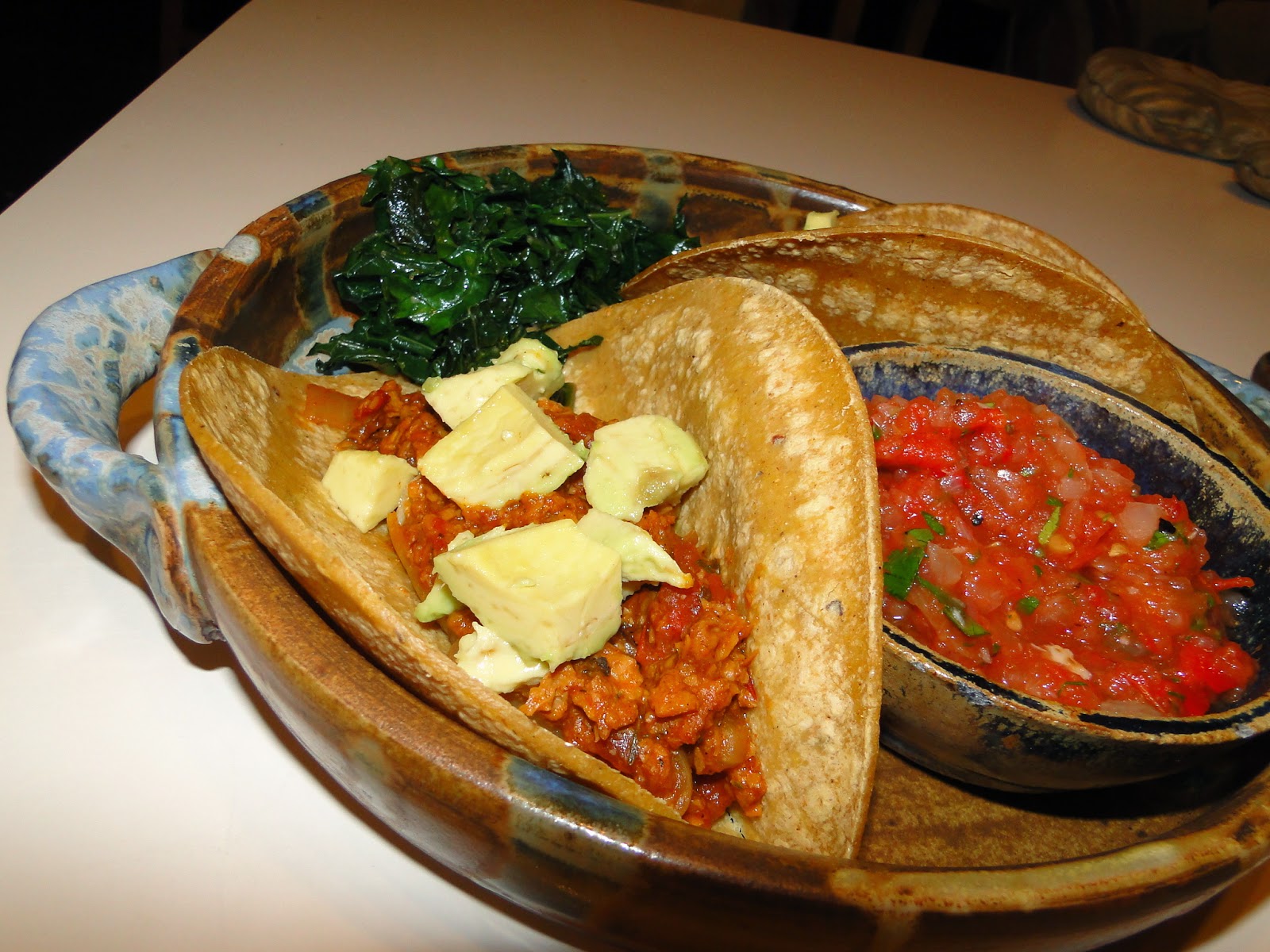 Your heath tranformation story is quite amazing. What finally made you take charge of your health and why vegan?
I'll be blunt. I used to be fat and diabetic. It was a pretty traumatizing experience. I had all the symptoms of diabetes. Joint pain, failing eyesight, spikes and crashes, having to sleep for way too long, cloudy thinking, neuropathy, and chronic infections, all by the time I was in my mid-twenties. A pretty drastic change from being a high-school athlete. The thing is, obesity and diabetes feed on themselves, so both got worse quickly. I eventually had a life-threatening infection and after being treated for it, I was told I had to take medication for the rest of my life. I thought first, I never want to go through that particularly painful treatment again, and second, it's ridiculous that I was being told to take meds and I wasn't even thirty. So I did the best thing that I could. I switched my diet after discovering Dr. John McDougall's work.
Did you go vegan cold turkey or was it a gradual shift?
I was vegan, except on Wednesdays, when I would go to my favorite restaurant and get all-you-can-eat enchiladas. After a while, I would go every other week, then once a month, and finally, I realized the enchiladas didn't taste good anymore and I felt horrible after eating them. I also learned about factory farming during that time. One day, I simply stopped eating them and then I was fully vegan.
You kicked diabetes single handedly. With so many Americans being diagnosed with diabetes and other degenerative diseases, what suggestions do you have for those who want to live a healthier lifestyle?
Make as many changes as you can, but don't make so many that you end up feeling a high level of stress about a lifestyle change. The more changes you make, the more you will want to make. Give yourself some time and don't let anyone tell you to go from 0 to 60 and make you feel bad when you can't.
If you could cook for and dine with anyone in history, who would it be and why? What would you make for them?
Heh, I have an interesting answer for that. I'd dine with Socrates and make him a meal with chiles and coffee. Maybe a chilaquile with coffee chile sauce. Coffee and chiles act as stimulants and therefor antidotes for hemlock. Once I mitigated the hemlock poison, with a fine meal I might add, I'd try to smuggle him out of Athens. A vegan meal to save one of the great philosophers of ancient Greece! Ok, it might be best not to ask me questions like this, lol.
Jason, you and I met several years ago. At the time you were the only vegan caterer in the Phoenix area. You catered both my bachelorette party and my wedding. Not only was your food incredible, but as my non-vegan friends ate it, they thought it was delicious. Have you seen a change in the vegan food scene here in Arizona? Do you have some suggestions for Phoenicians looking for good vegan friendly restaurants?
There are a few more restaurants, and a couple less. A few of the more popular ones here have problems, but I always recommend Fresh Mint to people. It's on Scottsdale and Thunderbird Road.
I often get the question "What do we feed you people?" from friends and family. How do you handle social events as "The Vegan"?
I just make food with bold flavors and hearty textures if I am cooking for others. When serving non-vegans, you need something that cuts through all the rich foods they are used to eating. It's as simple as that.
Tell us about your new book Vegan Tacos.
This book isn't just a book about vegan tacos, it happens to be one of the most comprehensive book of authentic Mexican tacos published in English, regardless of being vegan. I love real Mexican food. It's complex, bright, bold, spicy, and soulful. A true taco encapsulates all of those aspects into a handheld bite. I went to Mexico to find as many authentic tacos as I could to bring back to the vegan community, and I found an entire book's worth of them! You'll learn about the different styles of tacos, plus Vegan Tacos has entire sections dedicated to salsas, how to make your own tortillas, and various toppings for all the taco recipes in the book.
It's also filled with historical and anthropological information because I think the story of food is fascinating. To me, it's not just what is on the plate. 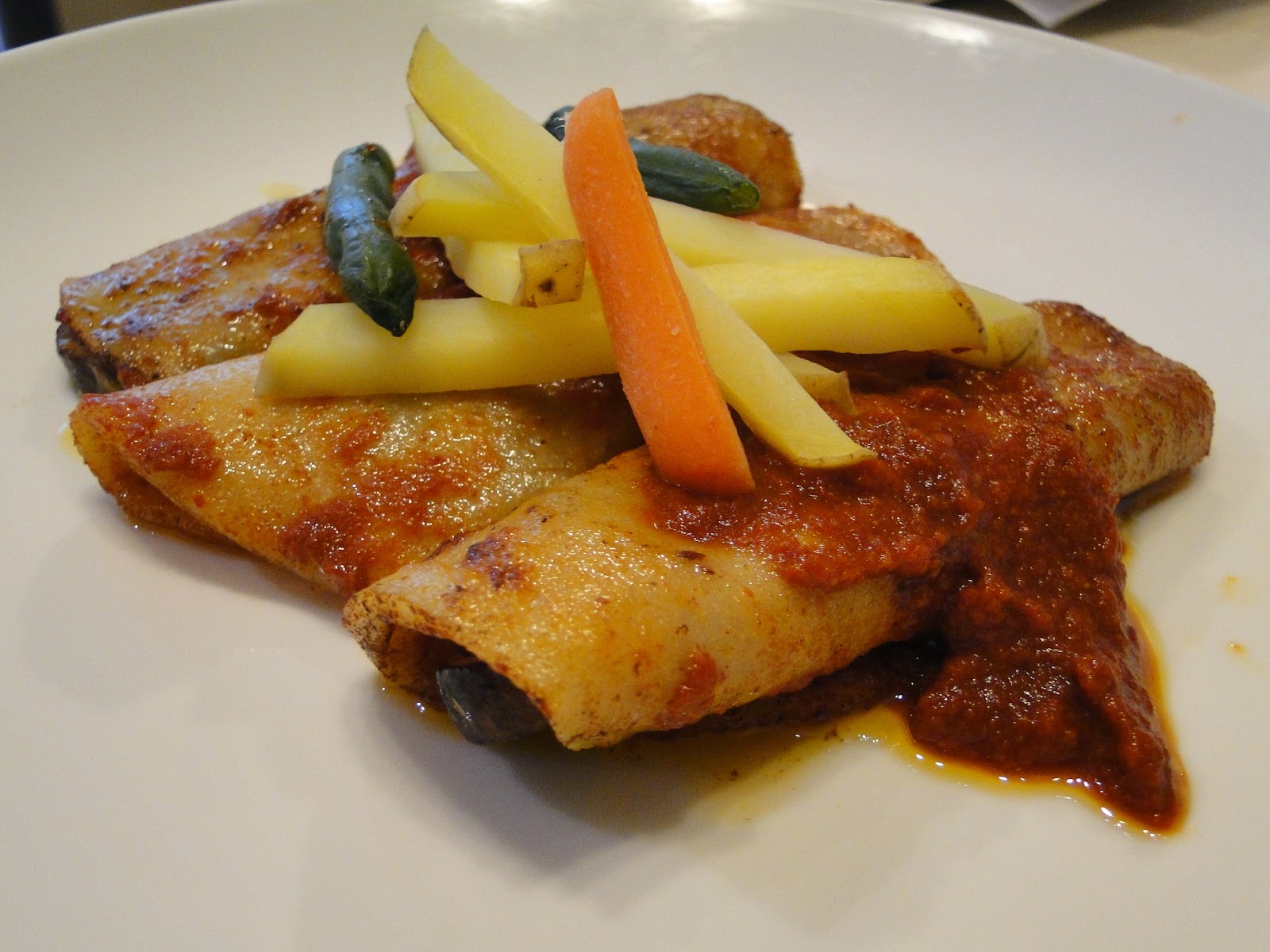 You have been writing, creating and teaching for a long time. What did you find most challenging about writing a book compared to you digital publications?
Print photography is a lot more exacting than photography for digital publications. The other challenge is that once it's printed, it's set in stone. With digital publications, you can update them as needed. There are also space limitations with a physical book, although kudos to my publisher, because the book was slated to be much smaller than it ended up being, but once Vegan Heritage Press saw all the material, they upped the page count instead of cutting the content. Overall, I think digital products are more versatile and pack more information if done well, but they're not considered as legitimate as having the information printed on a page. Hence, why I switched to writing books.
I'm a lover of southwestern fare as you can probably tell by many of my blog posts. What recommendations can you make to those who do not live in the Southwest as far as finding the chiles and spices that give life and bold flavor to your recipes?
If it's a dry chile, order them from Amazon! They're not expensive and you can get big bags of dried chiles shipped right to your door. For fresh chiles, you should at least be able to find jalapenos so you can get some heat in your tacos. I travel around the country a lot teaching vegan cooking classes and it is rare that I find a place where I can't find decent Mexican ingredients.
What is your favorite recipe from Vegan Tacos?
Right now, it's the Grilled Lime Margarita with Mesquite Smoked Salt. Did I mention that there is an entire section on drinks in Vegan Tacos? Now I want to make another margarita...
What's next? Do you have another book in the works?
I do have a few more books in the works, although I can't talk about them yet. I'll be traveling around to various vegfests doing taco demos and showcasing amazing vegan Mexican food to people everywhere! I can't wait.

Thanks for the great interview Jason!

And now…the winner is…#9. Elizabeth! Congratulations. Get ready to have a delicious fiesta! 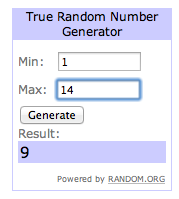 Now for what you have been drooling over! I will be giving away a copy of Vegan Tacos to one of you loyal readers. Leave a post about what you dream about having in a taco or your favorite Mexican food or spice by this Friday, March 6th by midnight MST. The winner will be drawn at random on Saturday the 7th. US only please. Muy Bueno! Good Luck! *****PLEASE MAKE SURE TO LEAVE ME A WAY TO CONTACT YOU, THANKS****