The anticipation of New Year's Eve was pretty strong this year. Why you might ask? Well of course, I was pretty psyched the Mayans were wrong. But the real reason for my excitement was yet another opportunity to cook and celebrate with great friends and incredible food!! I've had this mini-obsession with Asian influenced food as of late. When my friends were down with the theme, I was so happy!

The first course was incredible. I can't decide what was more impressive: the flavors or the presentation. Beth and Jerry always go all out and this year was no exception. Ohitashi is a Japanese spinach salad. It is a pretty and delicious way to get your greens. In their version it is paired with a crazy flavorful tofu that was flecked with roasted garlic slices. 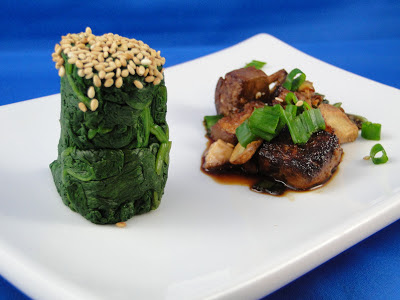 On to the second course! Gail and John made their gallant return this year after belly-dancing commitments kept them away last year. Gail was a little tentative about the Asian theme at first, but she conquered her fears and made a stellar slaw that can be made more simple by purchasing pre-shredded slaw mix. The dressing was was a delicious mingling of sweet, spicy and peanut-y. They substituted agave nectar for the honey to easily veganized the original recipe. Look at the beautiful colors!! Oh and by the way, that amazing plate was made by my dear friend Daphne of Daphne Azzi Ceramics! 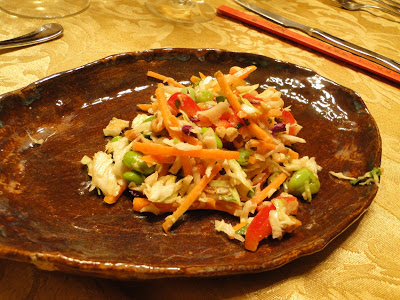 Fred decided he wanted the entree this year. We teamed up on this effort. He selected a beautiful and delicious course and sides from Candle 79 Cookbook. I made the seitan the day before. I thought I was having a seitan disaster, but it ended up being really nice. In Jerry's words "The best seitan I've had." It was based on Tamasin Noyes' seitan cutlet recipe from AVK.

Fred prepped the sauce ahead of time. I'm usually not a huge fan of mint in savory dishes, but I have come around to a lot of different flavor combos over the years. The mint sauce was awesome with the asian spices in the rest of the dish. Fred paired it with a local vegan wine: Arizona Stronghold Centennial Pink which is a blend of Zinfandel, Grenache and Muscat. I thought it would be very sweet, but it was actually very well-balanced.This was a lovely pairing for this dish with hints of cranberry and rhubarb. It paired very nicely with the subtle spiciness of the soba noodles and the ginger laced snow peas. 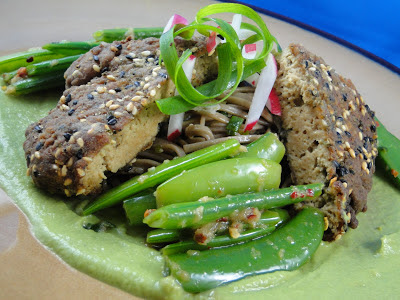 I was in charge of dessert again this year. Not my favorite course, but I always embrace the challenge. I decided to create my own dish with a little help from Terry Hope Romero. The cookie bowl was made from her fabulous Terry's Favorite Almond Cookie recipes from Veganomicon. I created a ginger-lychee ice cream and sprinkled the top with fresh diced mangos and pomegranate seeds. The plate was painted with mango puree and a black sesame caramel sauce. This was paired with a lovely vegan saki: Sayuri Nigori Sake.

Here's a little side story about my sake shopping experience. So I'm standing there by the sake at BevMo with my iPad fired up to Barnivore. A woman was checking out the sake at the same time. For some reason I felt compelled to explain what I was looking up...well actually I wanted to brag about my pending awesome vegan dinner to anyone who would listen. Talk about perfect timing! She told me she was meeting her vegan friend for NYE and didn't know what to get. She was in luck. We checked out some options on Barnivore for her friend. She was very happy and I was thrilled to be able to help her out! 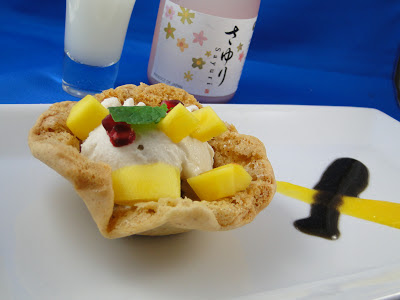 As the midnight hour approached, I popped open the bubbly. This year's selection was Piper-Heidsieck Extra Dry Champagne. I wish I could describe it to you, but I waited to long to post and my memory is now a little fuzzy. I do remember it being a little more fruit forward than some of my favorite sparkling wines, but the crowd liked it and it was a nice way to ring in  2013.

We planned on choosing our theme for next year before the night was through, but we got wrapped up in many other conversations and never got it done. We did decide it would not be Indian which make me kind of sad. But there are so many other options, I'm already excited about next year. Food geekery at its finest!