Pizza Heaven in Phoenix Has a NEW VEGAN Menu!!

I was plunking around the internet a couple of weeks ago and found this blurb about a little family owned pizza joint in Phoenix that offered vegan pizza. I was pretty excited right out of the gate and was hoping to check it out. A short time later I got an email from the VegPhoenix MeetUp group saying they were going to be having an event there to celebrate their new vegan menu. Could it be that there would be even more offerings than pizza? 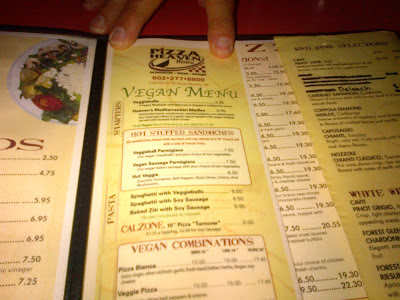 My friends (all non-veg) and I were planning to go out somewhere to meet for dinner, so I craftily suggested Pizza Heaven. They thought it was a great idea as their 7th Street and Coulter location was very conveniently located for them. We all love to support individually owned businesses, so it was set.

We arrived before our friends and were happy to be able to be seated before 5pm as they were already open. We received a very friendly greeting as we walked in the door. It is a tad bit dark in the dining area, but cozy. Our server was very sweet and made sure we had everything we needed. The owner stopped by to chat for a while. She was super friendly as well. She brought us carry out menus and made sure we were having a good time. I expressed my deep gratitude for the offering of a vegan menu. The place got hopping as there was a group of about 30 people from VegPhoenix that were there for an event. We got our order in before they started to arrive. Even with a full house, the service was great.

On to the food. As always, I tend to want to order every vegan thing on the menu. But I did show a little constraint. I ordered the Veggieballs. They offer a Buffalo style and another option with marinara. I adore buffalo sauce, so that's the way I rolled. Fred ordered the Spaghetti with vegan sausage and we ordered the Veggie Pizza (minus the green peppers) to share. The balls came out first. They had a pretty good texture and were nice and spicy. It was a yummy way to get some Buffalo action, but I think the flavor and texture of the balls was more suited to a marinara sauce. I asked the owner what was in the balls and I can't remember all of the ingredients, but I do remember she mentioned beans and veggies. They came with vegan ranch and carrots. The presentation wasn't anything show stopping, but hey, it's Buffalo balls. Apologizing in advance for my phone pictures. 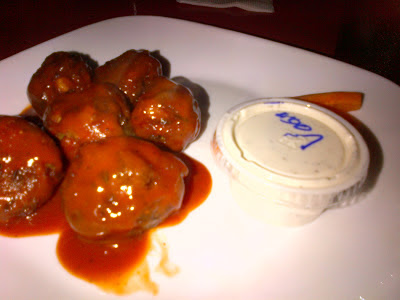 Next out was Freddie's Spaghetti. Unfortunately, Fred put parmesan on it before I got to take a bite, but he said it was pretty good. He's a bit spoiled with Julie Hasson's Italian Sausages that I make at home. They are hard to live up to. But seriously, it is so exciting to be able to get vegan spaggets and sausage out! 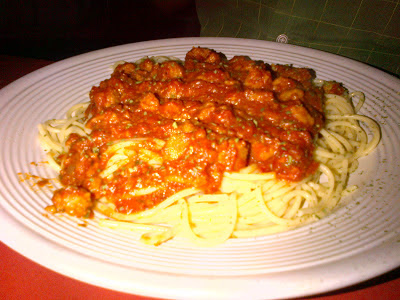 Then there was the pizza! I loved the crust. It was crunchy and had great flavor. For me, I'm always on the fence with vegan cheese. I feel like less is more. There was quite a bit on the pizza, which most would probably be good with. I wanted more veggies than cheese and Fred agreed. But that crust! Oh Mylanta (as my good friends Sharon and Julie would say).  Pizza Heaven indeed. We reheated the pizza tonight for Fred's dinner. I baked it at 400 degrees right on the rack. The crust crisped back up beautifully and the texture of the cheese was even better reheated. 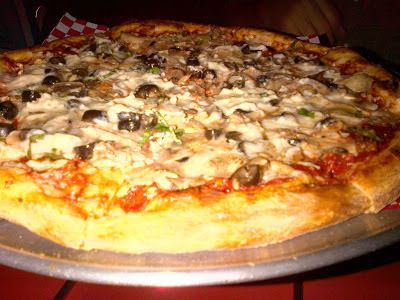 Here is a picture with my good camera. This is the pizza re-heated. So good. 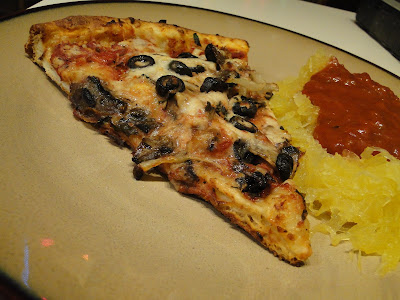 The rest of our group had the regular veggie pizza and some salads. One of them had the spinach calzone (which was the size of her head). They were very happy indeed. There is no doubt we will all be returning to Pizza Heaven. I can't wait to try the gigantoid vegan calzone!!! They also offer a couple of vegan sandwich options and vegan baked ziti. Great service, clean restaurant and good food. It is a perfect place for vegans and omnis to both enjoy a great home made meal. Oh and they deliver too!!!