Welcome to the March Madness version of Vine and Dine. For my newer readers; Vine and Dine is a fun little challenge that Tami from Vegan Appetite created. She selects a recipe from a vegan cookbook and we go about trying to find a vegan wine that will complement the dish.
The selection for this time around was Beer Battered Tempeh Fish with a Tartar Sauce from Spork Fed by sisters Jenny Engel and Heather Goldberg. Fish and Chips certainly have their origins in the UK. Exactly which part of England and which version is the true version is a matter of hot debate to this day. One indisputable fact is that Fish and Chips were one of the dishes saved from rationing during World War II. No small deal.
This version would make the old school folks turn their noses up for sure! Tempeh instead of fish? Bloody bang out of order! Tempeh actually worked quite nicely here. I have to admit the texture of the tempeh did not come close to fish, but it was very nice with the batter. I might add some dulse or other sea type seasoning to add a bit of a fishy flavor.  This "fish" recipe and the tartar sauce recipe were both very simple. Admittedly, this was a very indulgent dish; not low fat by any means. I opted to halve both recipes, which was a good call. I don't think this would re-heat well.  The batter fried up beautifully crispy and golden. The creamy tartar sauce had a great pungent and salty quality from the capers and olives.
I opted to make my own "chips". I used un-peeled russet potatoes. I did a quick blanching in hot oil for about 3 minutes. The potatoes were cooled completely and then fried again to perfect crispy golden perfection. They were tossed in seasoned salt. As is tradition in the UK, these were served with my very in-authenic version of mushy peas. This was a very filling, comfort-foody dinner. Fred really liked it. But I did let him know, this would probably not be in the regular rotation. I could feel it going directly to my hips and thighs! 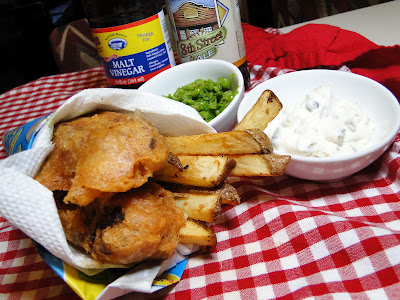 Here is Fred to chat about the wine:
Tonight we (well actually Kim, as I worked a 15 hour day) picked an Arizona Stronghold white table blend called Tazi to accompany our meal. Tazi is also the name of Cochise's oldest son, the "peacemaker" for the Chiricahua Apache Tribe. Malvasia, Sauvignon Blanc, Reisling, Pinot Gris, and Chardonnay were all packed into this bottle which turned out to be a "comfort" wine for me, as no one grape took over. Every sip melded with each bite of food. It was wonderful!
The nuttiness of the tempeh was complimented by the Chardonnay characteristics and then the peas got a goose from behind with the bright freshness of the Pinot Gris. It has a pomelo (asian grapefruit, only sweeter) finish which almost cleansed the palate after every sip. This wine with this meal is interesting, has personality, and is definitely fun. Tazi was indeed full enough to have it's own identity but yet a peacemaker with every flavor in our meal tonight. 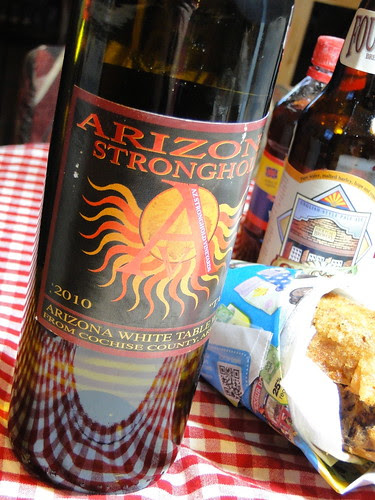 A side note from the cook: All day long, I kept saying, "I can't even imagine not having beer with this dish. Maybe we should just break the rule and have beer." Last minute I went and found a wine for the dish so I wouldn't be a rule breaker. When did I become a conformist? In the end I'm glad I was...this time.
You can see below that Fred is holding the debate in his head even as we are sitting down to eat. He is musing over two local beverages. Four Peaks Brewery 8th Street ale is made in Tempe, AZ, home of the ASU Sun Devils. According to Barnivore, most of their beers are vegan friendly with the exception of their cast-conditioned ales served at their pubs. Arizona Stronghold is produced in Cochise County Arizona. All of their wines produced after 2008 are vegan friendly. 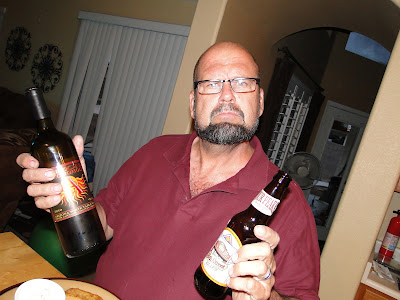