In hind sight I should have left well enough alone, but I had it in my head that I wanted to make Fred some pickled beets. He buys lots of pickled goodies from the farmers' market. It's good stuff, but holy wow is it expensive. So I thought if I could come up with a good recipe, I could save him some hard earned cash.

This recipe is not one to be saved in the pantry as it is not pressure cooked. It is a refrigerated version that will keep for a couple of weeks in the fridge. I decided to try agave nectar to lower the glycemic hit a bit. Fred gave them his seal of approval...with a caveat that they are a little vinegary. Just warning you ahead of time, these are not sticky sweet beets. I used the Chioggia in the first batch and beautiful rings faded, so I recommend using single colored beets for pickling and save these beauties for steaming. 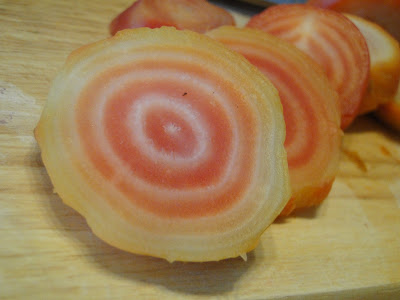