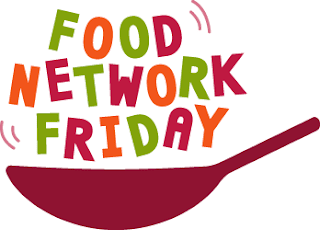 It's been a couple of months but we are back at it. It is the return of Food Network Friday's hosted by Tami of Vegan Appetite. Make sure to visit her blog to see how the other participants created their dishes for the challenge.

This time we are taking on Paula Dean by veganizing her recipe for Turkey Pot Pie. She loves to poo poo tofu and thinks nothing can be made without full cream butter, heavy cream and fatty meat. Despite these shortcomings, I do enjoy watching her. She has a very sunny personality. Her anti-vegetarian bent made this week's conversion even more fun.

My original plan was to not only veganize the butter queen's recipe, but to make a healthy version. I was super motivated to also make it a hand pie. While my intentions were good, once I got cooking I ended up abandoning both of my ideas. I found a box of vegan creamy portobello soup, so instead of taking the lighter road, I ripped open the box and forged on! The hand pies were still on the agenda...until my puff pastry decided to be uncooperative. So what the heck, I cut the pastry into strips and carried on.

I thought the proportion of cranberries was too much, so I reduced them to 1 cup. I used TVP chunks re-hydrated in water with Bill's Chiknish Seasoning. I had to play around with my puff pastry. I decided to serve this as a deconstructed pie. The filling was placed in small ramekins and garnished with puff pastry strips. Alternately you could make the lattices like she does in her dish, but I almost think that might make it too heavy. The cranberries provided the perfect hint of tart to mellow out the richness of the rest of the filling. I served it straight up. It was so rich, I knew I wouldn't be able to eat anything else with it. Look how pretty it is! Wouldn't it be lovely on your Thanksgiving table?

The verdict is in. I took samples of this too work for my anything but vegetarian co-workers. They were amazed at how "meaty" and really delicious this was. One guy even had seconds! I say that's another win for vegananizing another FN recipe!!! 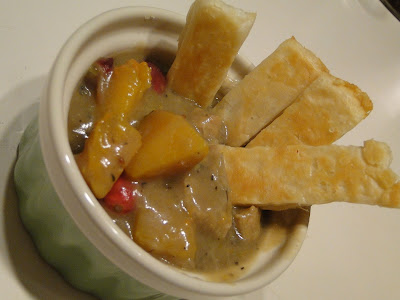