This week's featured recipe came from Horizons: The Cookbook: Gourmet Meatless Cuisine. This is a favorite of our hostess Tami Noyes over at Vegan Appetite. I've only made a couple of things from it so far and I can see why it is a favorite.

This week's recipe is far more difficult to spell than to make. I chose to use a good variety of wild mushrooms: cremini, portobello, Maitake and trumpet mushrooms. The mushrooms looked so good at Whole Paycheck this week. I'm so glad I did a variety as it really added some fun texture to the dish. I chose to follow the recommendation of grilling the mushrooms first. I do think it was a good choice as it made the mushrooms soooooo tasty. 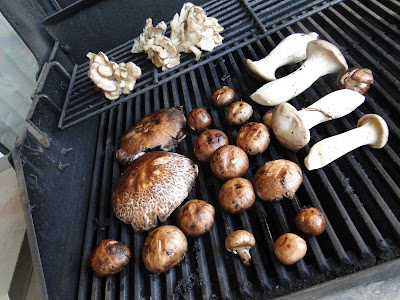 This was a nice one pan meal (minus the croutons). I liked that it was not a heavy dish. The touch of fennel made it remind me a bit of my mom's chicken cacciatore recipe for some reason. 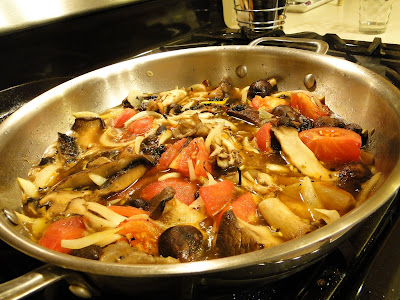 I used a basic french baguette sliced very thinly and then baked until crispy for the crouton. I very much liked the red pepper mixture on the bread. However, I didn't think it did anything to enhance the bouillabaisse.  It didn't hurt either, just meh for me. I thought the tomato, mushroom and fennel combination was divine. This will be a summer favorite for us!! 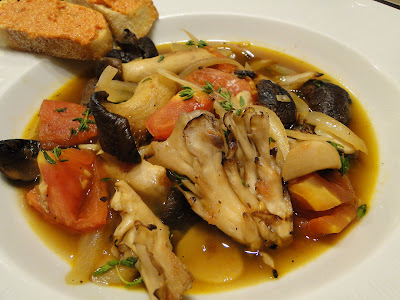 Here is Fred's review of this week's wine selection.

The quest for easily found vegan wines continues. I have a bigger list but so many of them tell me most of the wines that come from a certain winery are vegan friendly, they just don't tell me which ones. I did find a vegan wine labeled 50% cab, 50% malbec from Chili. "Nuevo Mundo" makes organic, vegan, sustainable, and certified carbon neutral produced estate bottled wine. This was a very good middle of the road red wine, one that I would introduce to someone that was just starting to drink wine. It was very pleasant on the tongue after opening up for ten minutes.

Kim's dish was loaded with mushrooms so I think it needed a more exciting, stronger, spicier, wine to compliment it. The malbec grape seemed to match the dish to much, being kind of earthy itself. This wine would please everyone in a crowd but just didn't have enough pop for our dinner tonight, perhaps it would be nice with a spicy, tomatoey dish. I will definitely by more of this brand as it is so earth friendly and kinda good in it's own way. 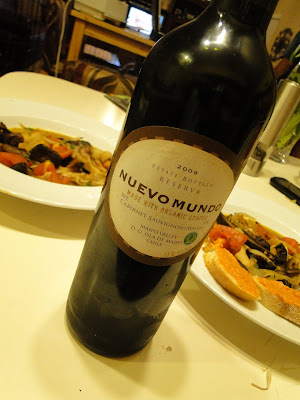