Food Network Friday marches on. Check out the wrap up at Vegan Appetite

I am very late posting, but it was a very busy week last week. I didn't have much kitchen time. Tonight I took a crack at Guy Fieri's Chicken and the Bodacious Bulb. 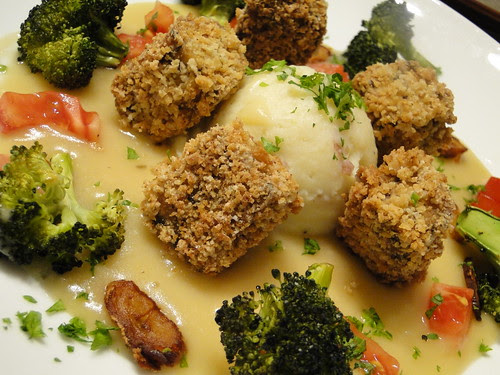 For this recipe I think I used 7 pans! For the stock, I used Bill's Chickn-ish Seasoning, Better than Bouillon Organic Veggie base in 4 cups of water. I decided to roast the celery, carrots, onions and I added mushrooms and whole peppercorns. I put the roasted vegetables in the broth along with the garlic in cheese cloth. I did sub Earth Balance for the garlic oil so that I would have plenty for frying. Somehow I missed the instructions that said to put the garlic in the roux. This misstep made me miss out on some serious extra garlic flavor I'm sure.
For the chicken, I used tempeh. It was steamed first. Then it took a bath in some soy milk. It was coated with a mixture of corn starch and panko crumbs seasoned with granulated garlic, smoked paprika, salt and pepper. Using the garlic oil to fry, the tempeh wound up with a really crispy crunchy crust. The coating was pretty awesome!
I did use the garlic cloves in some very tasty mashed potatoes. Those were made from red new potatoes whipped with the garlic cloves, a touch of Earth Balance, salt pepper and as an added bonus, I added some Bubbies horseradish to give them a little kick. The plate was finished of with some roasted broccoli that was tossed in a bit of the garlic oil, diced organic tomatoes, fresh parsley from the garden and the crispy fried sliced garlic.  I am usually a pretty big fan of tempeh, but for some reason even after steaming, it was a bit bitter. It might be better if it was marinated in something first. I think this might actually be better with marinated tofu.
This one didn't sing to me. It seemed very heavy and high in calories and the flavor was not as good as I expected (this could be partly because of the garlic exclusion in the gravy, and not the recipe). I'm not sure I'd go for this one again. It could be personal preference, or it could be that I have been eating way too much rich food the past couple of weeks and I'm over salted and burned out on rich stuff. Fred said he drank 6 glasses of water after eating this, so maybe my broth had too much sodium. My fingers are still puffy. But I did love the garlic oil, so that is a win.
Posted by Veg-In-Training at 9:53 PM