This week's challenge is a recipe for Chile Relleno Burgers from Food Network Magazine. Chile Rellenos have been an obsession/addiction for me for quite some time. I no longer partake of the cheese, but in the day I went to many Mexican restaurants in search of the ultimate Chile Relleno. My love was the regular cheese stuffed variety. Not that I couldn't appreciate them stuffed with other goodies, but the true test of authentic goodness and skill of the recipe creator was reserved for the cheese only version. In my trials I had some super eggy messes, grease bombs, some with almost no chile in them (REALLY?), naked, sauced, baked, you name it.

After several years of researching, my favortie ended up hailing from a small taco shop whose employees spoke little or no English, the music was so loud you couldn't hear yourself chew and, well, lets just say it was always questionable whether they might pass health inspections. They had the perfect coating/chili/cheese ratio. Depending on who was cooking on any given day, the fried beauties would be served with a heavenly light tomato sauce. You never knew what the spice level of the chiles would be. Some days they would be very mild. The next time they would almost blow your head off. I think part of the allure was the mystery of what you were going to get that day. One thing was always consistant; they were always delicious! Ah, but I digress.

My happy relleno memories made this a must try conversion for me. The original recipe calls for beef and cheese. It is technically not relleno (stuffed). As is my often M.O., I took the liberty of modifying this one considerably to be something that would make it a bit more authentic and a lot more my own. First it was important to develop the burger itself. I had yet to develop my own burger recipe, so I figured no time like the present. The burger, while very tasty and delicious, has some textural issues, so I won't be posting the recipe. It is still a work in progress. I used the flavors of mushrooms, onion and soyrizo to give you an idea of the flavor profile. The texture is too soft, so I am going to rework it and maybe even come up with a gluten free version. I will share with you the method and maybe some day soon I can share a workable recipe. After developing the burger I used a 1/3 cup scoop and portioned out 8 scoops. Each portion was shaped into a ball and flattened between two sheets of parchment paper to about 1/4 " thick and 5" rounds. Then about 1 1/2 tablespoons of shredded Italian Daiya were placed on the round leaving a 1/2 inch rim around the outside. On top of that one roasted and peeled chile was placed (also leaving the 1/2" around the outside edge. Then another one of the rounds was carefully placed on top. The edges were pinched together to keep the tasty goodness safely inside. The burgers were then grilled for 6-8 minutes on each side.

While they were grilling, I sauteed a mixture of thinly sliced mushrooms, pablanos and onions seasoned with my own taco seasoning mixture. The whole shooting match was served on top of some yummy whole grain buns with fresh avocado slices and tomatoes slices. I HAVE to get the textural issues remedied, because hot damn were these tasty! 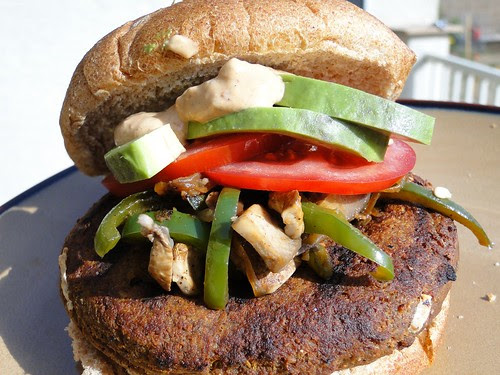 The real beauty is on the inside. 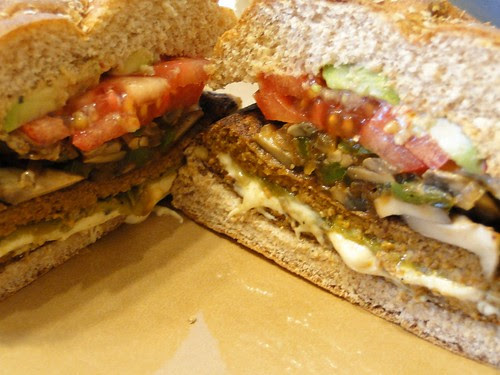 Don't forget to check out all of the other creations at Vegan Appetite!
Posted by Veg-In-Training at 1:00 AM