Hello my little blogatrons. I am so sorry I have been remiss in my blogging duties. We've had surgery recoveries, dog adoptions, and graveyard shifts to attend to. We also had a freaking awesome vegan bake sale in between, which I must blog about next. It was epic!

This week's FNF challenge was a remake of this Jamie Oliver recipe. I found it very curious that Mr. Oliver works so hard to bring healthy cuisine to school lunches but feels it is just dandy to use pork, bacon and it's grease in this recipe. Not exactly going to give him a glowing report card on healthy cuisine here. In his defense, he does also incorporate red peppers and chard which both pack a great nutritional punch. Check out Vegan Appetite website to see the other interpretations.

When I go about my conversions, I do my best to try and stay true to the original recipe as best I can. For this conversion I had to do a little math as it is written in metric measurements. He also makes use of the term a small handful which can be a bit subjective. Sometime I have to let go of my inner Virgo and just run with it.


For the chops I did a variation of a seitan tester from Isa Moscowitz's upcoming Appetite for Reduction cook book. You could really use any simmered seitan recipe that tickles your fancy. This one is nice because it is wetter than some others. It lent itself very well to being stuffed. For the "bacon" I used another tester from Julie Hasson's upcoming Vegan Diner; Smoky Curls. Yummy for the tummy. I had a hard time not eating them all before I finished the dish. I honestly think you could make a meal out of the beans alone (2 servings) if you didn't have the time or the inkling to make the chops, but they are truly special. If you have the time you should make them. 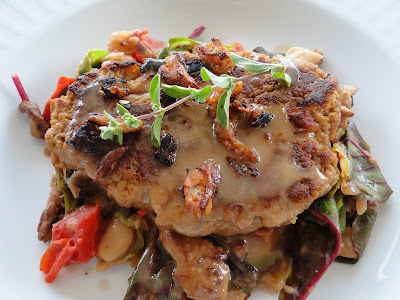 1/2 cup Smoky Curls or vegan bacon, plus a little extra set aside for garnish

1/2 lb baby chard or regular chard leaved coarsely chopped
As a little side note I got the chard, oregano, and rosemary out of our garden!!!!!

Using a mortar and pestal grind fresh oregano, salt and pepper. Add raisins, sherry and oil and grind until paste is formed.  Divide into 4 equal portions. Mix seitan recipe together. Divide into 4 pieces. Flatten into 5 inch rounds. Spread filling over half, leaving 1/2 inch border. Fold other half over and seal edges. Simmer as directed. Let seitan chill for several hours or overnight.

Once seitan is chilled start the beans. In medium sized saute pan or iron skillet heat Earth balance and olive oil over medium heat. Add onions and pepper. Saute 5-10 minutes until onions are translucent and pepper are just starting to soften. Add curls or bacon. saute for 2 more minutes. Add butter beans, vegetable broth, bay leaves and rosemary. Simmer for 20 minutes. Add chard and simmer for 2-3 minutes until it is wilted.

While beans are simmering. Make sauce and cutlets.

My preferred method is to use a large iron skillet on the grill. I find the grill give a beautiful even heat and sears the cutlet perfectly. Heat the grill on the highest setting. When grill is very hot put very well oiled iron skillet directly over the flame. Give it about 5 minutes to get very hot. Add cutlets and sear for about 5 minutes on one side. Make sure to spray uncooked side generously with spray canola before flipping. Sear other side for about 3 minutes. Turn grill to the lowest setting and let cook for about 5-8 more minutes being careful not to burn. As an alternate method this can be done on the stove top with an iron skillet or griddle pan.

Keep cutlets warm while you finish the other items.

In a shallow bowl or high sided plate dish out 1/4 recipe of beans to make a bed for the "chop". Place seared chop on top. Drizzle with 1- 2 tablespoons of the sauce. Garnish with sprig of fresh oregano and crispy vegan bacon bits. 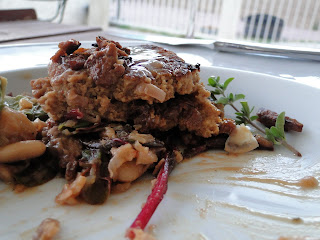